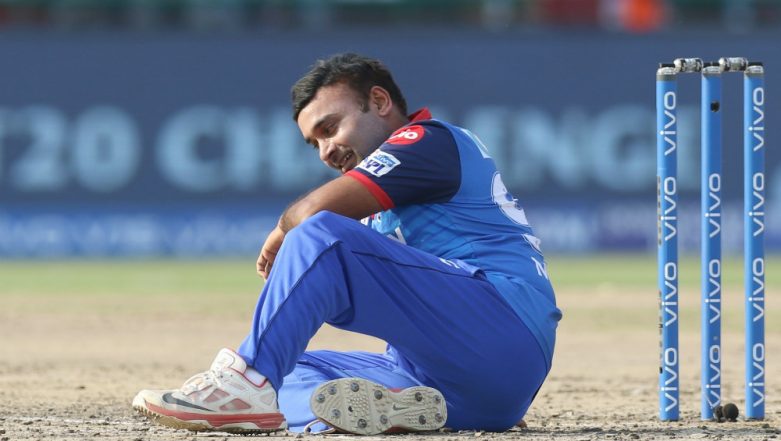 New Delhi, May 5: Delhi Capitals' Amit Mishra admitted he did abuse Trent Boult a little after he denied the leg-spinner his first hat-trick of this edition of the Indian Premier League (IPL) in their last group stage game against the Rajasthan Royals.

On Saturday, Delhi defeated Royals by five wickets and Mishra was named Player of the Match as he returned with figures of 3 for 17 at the Feroz Shah Kotla. However, he was disappointed that he couldn't take his fourth IPL hat-trick. DC beat RR by 5 wickets | Rajasthan Royals vs Delhi Capitals Live Cricket Score 53th T20 Match.

In the 12th over of the Rajasthan's innings, Mishra dismissed Shreyas Gopal and Stuart Binny off successive balls and had a chance of taking his fourth IPL hat-trick but Boult dropped, what looked like a simple catch of K Gowtham.

"I don't know if I have a love affair with the IPL but I am sad about the missed hat-trick. I abused him a little after Boult dropped the catch. I told him it was a simple catch and he could have taken it. Why did you jump unnecessarily?" said the leggie with a laughter at the post-match presentation ceremony.

"I told him off in English but he said sorry two or three times so it's fine," he added.

The 36-year-old is the second highest wicket-taker in IPL history with 155 wickets.

Mishra said he believes in building pressure with his stock delivery and understood why batsmen want to play him off without giving him too many wickets. So far, he has taken nine wickets in the nine matches he has played for the Delhi-based franchise in this season.

"I always try to bowl my stock ball more, because that is important to build pressure. I didn't get a lot of wickets this season because batsmen are trying to play me out," he added.