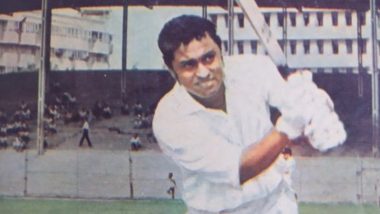 Dilip Sardesai was known for his abilities to play against spin. That despite the fact Indian batsmen are generally good when it comes to tacking a spinner. However, Dilip Sardesai still stood out when it came to facing spinners. Dilip Sardesai was born on August 08, 1940, in Margao, Goa. He played 30 Tests for India after making his Test debut against England in 1961. Known as 'Renaissance Man of Indian Cricket' he played his last match for India in 1972.

In one of his most remembered performances during India's tour of West Indies in 1971, he scored 642 runs in the series. In other notable performances overseas, he scored valuable 54 and 40 in the Oval Test against England to help India win the match. On Dilip Sardesai's birth anniversary, we take a look at some facts associated with his Test career.

In domestic cricket, Dilip Sardesai represented Bombay (now Mumbai) in 13 Ranji Trophy seasons. Interestingly, he featured in 10 Ranji finals, and Bombay never lost any one of those matches.

(The above story first appeared on LatestLY on Aug 08, 2020 10:28 AM IST. For more news and updates on politics, world, sports, entertainment and lifestyle, log on to our website latestly.com).