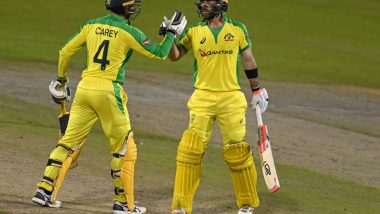 The third and the decider game between England and Australia at the Old Trafford in Manchester was truly an epitome of entertainment. Until the last ball of the game, one could not truly predict who between the two teams would walk away with a win. ENG vs AUS, 3rd ODI 2020. But in the end, it was Australia who walked away with the series, all thanks to centuries from Glenn Maxwell and Alex Carey. Aaron Finch and team won the game by three wickets. The visiting team won the game with a couple of balls to spare. Both teams put up a great fight but Australia had the last laugh. The home team had set up a target of 303 runs and Australia ended up making 305 runs. In this article, we shall bring to you the stat highlights of the match. But before that let's have a look at how the game panned out between the two teams. England vs Australia 3rd ODI 2020 Highlights.

The match began with the home team winning the toss and electing to bat first. Jonny Bairstow scored 112 runs from 126 balls and gave a good start to the team. Sam Billings and Chris Woakes scored 57 and 53 runs respectively. A cameo from Adil Rashid and Tom Curran helped the team reach a total of 302 runs. Now coming to the Aussies, the top order collapsed like a pack of cards and they were soon on 73/5. It looked as if they were on the verge of losing the match. But little did they know that Glenn Maxwell and Alex Carey would rescue the team from here on.

Both the batsmen brought up a 212-run partnership and thus rescued the team from the crisis. Both broke records in galore and they dominated the opponents like nobody's business.  The two couldn't remain unbeaten as Maxwell made way to the pavilion on 108 runs and Carey got out on 106. But the damage was done already and Australia walked away with the last laugh. Now, let's have a look at the stat highlights of the match below:

Glenn Maxwell was obviously named as the man of the match and also the player of the series for his superb knock. Even Eoin Morgan lauded the visiting team for the great game and of course their fighting spirit.

(The above story first appeared on LatestLY on Sep 17, 2020 02:19 AM IST. For more news and updates on politics, world, sports, entertainment and lifestyle, log on to our website latestly.com).