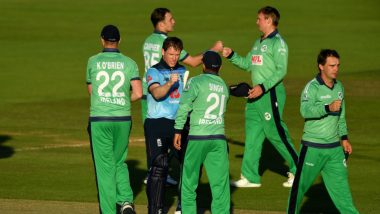 England defeated Ireland in the first of three-match One-Day International (ODI) series at the Ageas Bowl. The hosts set a paltry target of 173, completed it in 27.5 overs witch six wickets in hand. England did lose four wickets quickly, but 96 unbeaten stand for the fifth wicket between Sam Billings and captain Eoin Morgan helped England cross the line. Billings finished unbeaten 67 of 54 balls while Morgan scored 36 off 40 balls. Earlier, in the day, fast-bowler David Willey picked a five-wicket haul to restrict Ireland under 200. England vs Ireland 1st ODI 2020 Highlights.

Meanwhile, after being named Man of the Match Willey said, "wasn't sure if my opportunity would come again after the last 12 months. Obviously I've been part of the group four years, to miss out at the 11th hour was difficult. For me it's about going out and enjoying every minute. Every opportunity could be the last one. As I get closer to WC selection, you start thinking about that more. But that's come and gone now. Play my best cricket when I'm enjoying it. Hopefully the results keep coming."

For Ireland Craig Young picked two wickets while Andy McBrine and Curtis Campher scalped a wicket each. Earlier, put to bat first, Ireland were off to a worst possible start and lost half the side for just 28 runs. Meanwhile, let's have a look at some stats from the match.

# This was England’s ninth win over Ireland in 11 ODIs.

# David Willey registered his career-best figures of 5/30 in ODIs.

# This was David Willey first five-wicket haul in ODIs.

Debutant Campher was the highest scorer for Ireland as he scored unbeaten 59 off 118 balls. Apart from him, Andy McBrine scored 40 off 48 balls. The duo added 66 for the eighth wicket to take Ireland close to the 150-run mark. The second ODI now takes place on August 01.

(The above story first appeared on LatestLY on Jul 31, 2020 12:56 AM IST. For more news and updates on politics, world, sports, entertainment and lifestyle, log on to our website latestly.com).