England vs Pakistan 2nd Test 2020: Babar Azam, Chris Woakes and Other Key Players to Watch Out for in Southampton 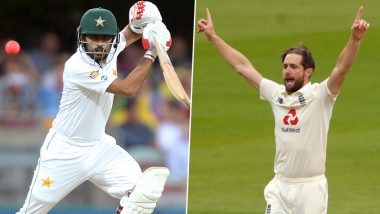 After winning the opening game of the series by three wickets, England will aim to seal the deal in the second Test match against Pakistan. ENG vs PAK 2nd Test will be played at the Rose Bowl in Southampton and will get underway on Thursday (August 13). Joe Root and Co must be high on confidence after registering a memorable victory but they also must aim to rectify their mistakes. On the other hand, Pakistan, who had the command in the major part of the previous game, need to analyse what went wrong. Below, we’ll look at some key players who can make a mark in the forthcoming game. Ben Stokes to Miss Remaining England vs Pakistan Test Matches Due to Family Reasons.

England might have a crucial 1-0 lead in the series. However, they will miss the services of their all-rounder Ben Stokes in the next two games as the southpaw withdrew his name from the series due to personal reasons. On the other hand, Pakistan can also make a couple of changes in the next game in order to get a different result. Meanwhile, as the second encounter of the series takes a countdown, let’s look at some key players who can come good in Southampton . Pakistan Can Still Win Test Series Against England Despite Manchester Loss, Says Inzamam-Ul-Haq.

The talismanic batsman impressed one and all with his fluent half-century in the first game of the series. He brilliantly tackled the swinging deliveries of England pacers and also scored runs at a rapid pace. However, he must eye to reach the three-figure mark in the upcoming game in order to guide the visitors over the line and level the series 1-1.

The England all-rounder put on an incredible all-round show in the first game and will be determined to replicate his brilliance. Along with playing that sensational 84-run knock in the last innings, Woakes also scalped four crucial wickets in the encounter. With Ben Stokes out of the series, the 31-year-old will have to play the role of England’s main all-rounder.

The 17-year-old speedster bowled with pace and hostility in the first game but was able to pick just two wickets. Well, these numbers don’t reflect Shah’s terrific show. However, the youngster needs to pick more wickets in order to help his side win. After losing the first game of the series, Shah must be raring to breathe fire in the second match to help his team cross the line.

Another hero of England’s triumph in Manchester is Jos Buttler. Chasing 275 victory, the hosts were reduced to 106/4. However, Buttler came to the party and changed the course of the game. The wicket-keeper batsman attacked the bowlers from the outset and scored runs all over the park. However, it will be interesting to see if the dasher can deliver consistently in the longest format of the game.

It’s not often seen that a spinner is dominating the batsmen in a Test match on England soil. However, Yasir Shah did that in the first match. The veteran leg-spinner spun his web and took eight wickets in the game which eventually went in vain. However, Shah will be ecstatic with his previous performance and will look to replicate his stellar show again.

Just like the recent Test matches, unfortunately, England vs Pakistan 2nd Test is also expected to get affected by rain. Frequent showers will certainly come into play throughout the five days which is certainly a great news for the fans. Nevertheless, the pacers must make good use of the overcast conditions to make a mark.

(The above story first appeared on LatestLY on Aug 12, 2020 01:01 PM IST. For more news and updates on politics, world, sports, entertainment and lifestyle, log on to our website latestly.com).