England vs West Indies 2nd Test 2020: Joe Root, Jermaine Blackwood and Other Key Players to Watch Out for in Manchester

Captain Joe Root will be back for his side, and that will boost England in a big way. He definitely is going to be a key player for the home side. So, ahead of the second Test, we take a look at some players who can be vital for their team’s success. 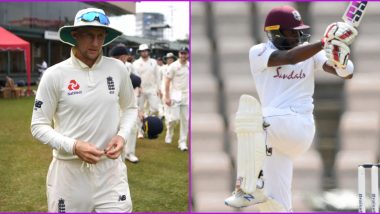 International cricket resumed with West Indies registering an impressive win over hosts England at The Ageas Bowl in the first Test. West Indies won the Test by four wickets and took a 1-0 lead in the three-match series. Set target of 200 runs, West Indies, lost six wickets before reaching the target. Right-handed middle-order batsman Jermaine Blackwood scored match-winning 95 to help his side win the match. Having earned the lead, West Indies will look to continue the momentum while England will be hoping to draw level in the second Test at the Old Trafford Cricket Ground. ICC World Test Championship 2019–21 Points Table Updated: West Indies Open Their Account With Win Over England, Topple South Africa.

Captain Joe Root will be back for his side, and that will boost England in a big way. He definitely is going to be a key player for the home side. So, ahead of the second Test, we take a look at some players who can be vital for their team’s success.

Jermaine Blackwood: After his 95, Blackwood will be oozing with confidence. His performance in the opening Test makes West Indies middle-order a bit stronger. All eyes will be on him in the second Test.

Joe Root: After missing the first Test Root is back for England. The skipper attended the birth of his second child and thus missed the first Test. His presence will not only boost England’s batting but will help the hosts in decision making as well.

Shanon Gabriel: The pacer was drafted in the Windies squad bit later, and it proved to be a good decision as he picked nine wickets in the match. After his four-wicket haul in the first innings, which included England top-order, Gabriel picked a five-for in the second innings. With Kemar Roach looking slightly off-colour, Gabriel now becomes a key bowler for Windies. Shannon Gabriel Has a Massive Heart, He's Been Through a Lot, Says Jason Holder.

Jason Holder: The Windies skipper once again proved that he is underrated when it comes to Test cricket. In the first innings, Holder scalped six wickets to restrict England to 204 runs. The all-rounder will key to Windies’ success once again.

Ben Stokes: The all-rounder has been relieved of captaincy duties, and with no added pressure, Stokes is expected to do better in the second Test. He remains one of England’s key players.

(The above story first appeared on LatestLY on Jul 14, 2020 01:37 PM IST. For more news and updates on politics, world, sports, entertainment and lifestyle, log on to our website latestly.com).