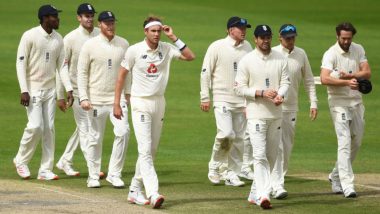 Fast bowlers Stuart Broad and Chris Woakes helped England clinch the three-match Test series against West Indies 2-1 by winning the third and final Test at the Old Trafford Cricket Ground in Manchester. The home side prevailed by 269 runs as they retain the Wisden Trophy. Broad, who scalped 6/31 in West Indies' first innings, took four more wickets in the fourth innings. On day five, Broad joined the elite club of bowlers with 500 or more Test wickets. Woakes too chipped in with a five-wicket haul as he finished with 5/50 in the fourth innings.  England vs West Indies 3rd Test Match Report.

On day five, England needed eight wickets to complete the series win. Broad and Woakes combined to pick the remaining wickets despite rain frequently stopping the play. Broad, who ended with ten wickets in the match, was named player of the match and series as well.

Following the match, Broad while speaking to host broadcaster said, "very special. When you get milestones, you want them to lead to match wins and series wins. So it feels very special today. Haven't ever really set any targets on that front Have learnt a huge amount through my career. Have done some technical work that makes me feel in great rhythm right now." England vs West Indies Highlights, 3rd Test 2020 Day 5.

"The competition keeps everyone performing. We've got a real battery of fast bowlers at the minute. Really strong bowling attack in these conditions. Have got the most out of the pitches. Chris Woakes today, he's been bowling beautifully since we got into the environment. The five-for is justified. Jimmy's still at the peak of his power, turns 38 in the break that we have. Such a pleasure to be playing with him. Have enjoyed playing this week together," he added. Stuart Broad Becomes Seventh Bowler to Take 500 Wickets in Test Cricket.

Meanwhile, Check Out Some Stats from the Match

# Stuart Broad now has most wickets (79) for England in the fourth innings.

# Teams opting to field first at Old Trafford have now lost three Tests out of ten. Remaining seven matches have ended in a draw.

England will now lock horns with Ireland in the three-match One-Day International (ODI) series, starting July 30. Following it, England will host Pakistan for three Tests and as many T20Is.

(The above story first appeared on LatestLY on Jul 28, 2020 08:13 PM IST. For more news and updates on politics, world, sports, entertainment and lifestyle, log on to our website latestly.com).