Stuart Broad completed 500 wickets in Test cricket and added another feather to his already illustrious hat. The right-arm pacer achieved the milestone by dismissing – in the ongoing 3rd Test match between England and West Indies. Broad became the seventh bowler and fourth pacer to get to the landmark. 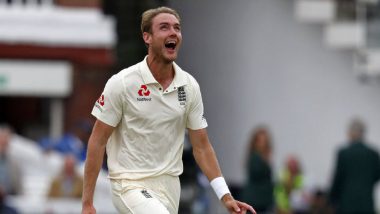 Veteran England pacer Stuart Broad completed 500 wickets in Test cricket and added another feather to his already illustrious hat. The right-arm pacer achieved the milestone by dismissing Kraigg Brathwaite in the ongoing 3rd Test match between England and West Indies. Broad became the seventh bowler and fourth pacer to get to the landmark. He is also the second England bowler after his partner-in-crime James Anderson to achieve the feat. With being just 34, a lot of cricket is still left in the pacer he also looks determined to serve England cricket in many more years to come. Stuart Broad Scalps 18th Five-For in Tests.

Making his Test debut in December 2007, Broad didn’t take long in cementing his place in the team. His ability to swing the ball both ways with a brisk pace made him a vital cog of England team across formats. However, he faced some torrid times early in his career. In the 2007 T20 World Cup, former Indian all-rounder Yuvraj Singh smashed the pacer for six maximums in an over. Stuart Broad Still Has Fire in the Belly, Can Claim 600 Test Wickets, Says Michael Atherton.

However, the pacer learnt from his mistakes and became a spearhead of England’s bowling. He formed a formidable pair with another England great James Anderson and together, the duo gave nightmares to many prominent batting line-ups.

After 2015 World Cup, however, along with Anderson, Broad was dropped from England’s limited-overs squad but continue to be a crucial part of England’s Test team. The pacer did lose some pace in recent times but his other abilities still make him a force to reckon with. In fact, Broad is one of those rare pacers who have regularly taken wickets with leg-cutters and off-cutters in red-ball cricket.

Coming to ongoing England vs West Indies third match, the right-arm pacer, who registered his 18th Test five-wicket haul during West Indies' first innings, has taken nine wickets so far and will look to clinch a 10-wicket haul. Courtesy his stellar performance, England are on the winning of winning the match and the series too.

(The above story first appeared on LatestLY on Jul 28, 2020 04:19 PM IST. For more news and updates on politics, world, sports, entertainment and lifestyle, log on to our website latestly.com).