Harbhajan, who had given just 17 in his first two overs and India’s match-winner in the semi-final against Australia, came to bowl the 17th over with Pakistan needing 54 from 24 deliveries and with Misbah their only hope for a revival. But Bhajji was smashed for three sixes over the midwicket turning the momentum towards Pakistan. 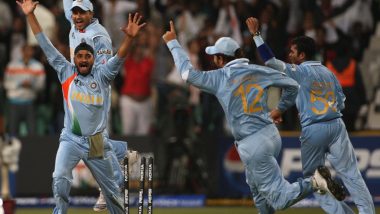 An India vs Pakistan encounter is always a relishing experience both for the fans as well as the players. The cricketers though have to deal with the nerves and an added pressure that comes with every IND vs PAK clash. Harbhajan Singh recalled one such moment in his career when under tremendous pressure he was rushing through deliveries and hoping that his bowling spell ended as fast as possible. The stage was the 2007 ICC T20 World Cup – the inaugural edition of the tournament. India, led by MS Dhoni, had come with a young and slightly inexperienced team. But much against expectations, India reached the final and were facing Pakistan in the title decider. MS Dhoni Can Play T20 World Cup Even Next Year, Don't Go by Social Media, Says Childhood Coach Keshav Banerjee.

India had opted bat first and relying on a superb 75 from Gautam Gambhir and a brief cameo from Rohit Sharma (30) and Yusuf Pathan (15), India had posted 157 on board. In reply, Pakistan despite efforts from Imran Nazir (33) and Yusuf Pathan (24) were struggling. Irfan Pathan timely three-fer and India’s strict bowling kept Pakistan in check. But all seemed to have broken loose when Misbah-ul-Haq smashed Harbhajan Singh for three sixes in the 17th over. 'IPL 2020 Would be a Great Fit', KKR Bowler Pat Cummins Welcomes Possibility of Holding Indian Premier League 13 Instead of T20 World Cup.

Harbhajan, who had given just 17 in his first two overs and India’s match-winner in the semi-final against Australia, came to bowl the 17th over with Pakistan needing 54 from 24 deliveries and with Misbah their only hope for a revival. But Bhajji was smashed for three sixes over the midwicket turning the momentum towards Pakistan. And recalling that over, Harbhajan opened up on how pressure kept on increasing every time Misbah hit a maximum.

“…After I was hit for a six, the pressure kept increasing. Rather than thinking what to do next, I was rushing through my deliveries. I wanted to just finish that over and feel, Chalo, ho gaya mera [I’ve finished my job],” the Turbanator said in an interview with ESPNcricinfo.  “Take that over where Misbah [-ul-Haq] went after me. Okay, anybody can be hit for a six or two sixes or three sixes, but was my process correct? Many times we [bowlers] are ourselves so scared about being hit, we send the batsman the message that we are on the back foot,” he added.

The veteran off-spinner also explained his strategy against Misbah in that over and why it failed. “So against Misbah I just wanted to bowl the quicker delivery and the yorker. Because in the the semi-final, against Australia, I bowled six yorkers and it worked,” he said. “Maybe there I was taking a bit longer, I was more focused, more composed, and able to stick to my plan.

Against Pakistan, maybe I was rushing. I was not soaking up the pressure. When you are in a rush, you are not settled. Your feet are not working properly,” Harbhajan added. “Or your hands do not coordinate smoothly in your bowling action. Your front hand falls down quickly, or your bowling hand comes late, sometimes the ball does not spin, and what you want does not happen.”

(The above story first appeared on LatestLY on May 28, 2020 03:33 PM IST. For more news and updates on politics, world, sports, entertainment and lifestyle, log on to our website latestly.com).