India Should Move On From Obsessing Over 2007 and 2011 World Cup Victories, Says Gautam Gambhir

India famously won the T20 World Cup in 2007 and the 2011 World Cup under the captaincy of MS Dhoni but they haven't won a World Cup since then. India's last ICC title was the 2013 Champions Trophy. 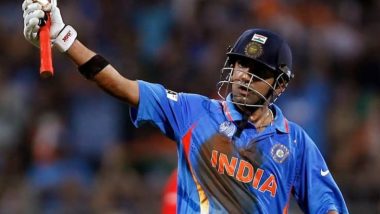 Former India batsman Gautam Gambhir on Friday stated that India must get rid of the obsession of winning the 2007 T20 World Cup and the 2011 World Cup. Gambhir had played very crucial roles in both those title wins but the former opener feels that its time the national team should move on now from those victories. Speaking at a show, he said, "It was special (being a part of the 2007 T20 World Cup squad), but I have forgotten about it. To be honest, India needs to move on from that. 2007, it’s what, more than 13 years ago and I think we need to get rid of this obsession of 2007 and 2011." ICC T20 World Cup 2021: India to Face Arch-Rivals Pakistan in Group Stage of Super 12s

India's last ICC title came way back in 2013 under MS Dhoni's captaincy when they won the Champions Trophy by defeating hosts England in the final. India have since then failed to win any major title, with this year's World Test Championship being the latest addition to that list.

A day ago, India were clubbed alongside Pakistan in the same group as the ICC announced its groups for the World T20 in October. Gambhir, while recalling his playing days shared how nervous he felt while facing Pakistan but urged seniors like skipper Virat Kohli and Rohit Sharma to take responsibility when they meet their arch-rivals in the World T20 later this year. "When I played my first international game against Pakistan I was probably much more excited and nervous as compared to some of the guys who’ve played a lot of cricket against Pakistan. So, it is the responsibility of the senior guys to probably keep the younger guys calm; because ultimately it’s not the emotion that will win you a game of cricket, it is the contest between the bat and the ball that will end up winning you a game of cricket. So people like Virat Kohli for example, or Rohit Sharma will have a huge responsibility when Indian takes on Pakistan," he said.

Robin Uthappa, who was also with Gambhir at the show, highlighted the emotions surrounding an India-Pakistan clash. He said, "“It just brings out so many emotions, expectations and people always look forward to it. I think, any cricketer who has played in the past or anyone who looks to play for India is always looking forward to an India-Pakistan game. Because it brings out a lot of emotions – at least for the people who watch the game, more than the people playing it."

(The above story first appeared on LatestLY on Jul 17, 2021 05:26 PM IST. For more news and updates on politics, world, sports, entertainment and lifestyle, log on to our website latestly.com).