India Tour of Australia 2020-21 All Set to Go Ahead With Adelaide Hosting the Pink Ball Test: Report 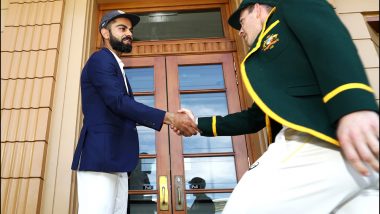 The coronavirus pandemic has brought the entire sporting world to a halt but things are returning back to some sort of normalcy as sports is returning back to action, though behind closed doors. As per recent reports, the much-debated India’s tour of Australia, scheduled for December of this year is expected to go ahead with the teams also meeting for a day-night Test match for the first time in their history. ICC All Set to Postpone T20 World Cup 2020, Decision Likely During Board Meeting on May 28; Window for IPL 13 in October-November.

With international cricketing action coming to a standstill since mid-March, this high-profile series is expected to kick-off the global cricketing calendar. According to a recent report by The Australian as mentioned by Fox Cricket, India and Australia are all set to go ahead with their four-match Test series with the two teams also meeting for a first pink-ball clash in the longest format. Pat Cummins Fires Warning to Virat Kohli-led Team India Ahead of India vs Australia 2020, Says ‘We’ll Be Ready for Them This Time’.

It is understood that the series will begin in the first week of December with a match at the Gabba in Brisbane – a venue where the hosts are undefeated since 1988 – before the two side travel for a Day-Night Test at the Adelaide Oval. If all goes to plan this will be India’s second pink-ball Test with Virat Kohli’s men playing their first against Bangladesh in Kolkata last year.

The remaining two matches in the tour will be played at Melbourne and Sydney. It is still not clear whether the crowd will be allowed inside the stadiums as a decision could be taken once the pandemic eases up.

The publication also reports that BCCI have also agreed to play three ODIs in January 2021 to help recover the expected loss of revenue from the ticketing sales. The matches are expected to be played at Perth Stadium, MCG and SCG.

(The above story first appeared on LatestLY on May 27, 2020 06:31 PM IST. For more news and updates on politics, world, sports, entertainment and lifestyle, log on to our website latestly.com).