But there was no stopping Nazir. His answer to the wicket was a boundary through fine leg. Sreesanth came back and bowled a maiden to Younis Khan. The drama was, however, to come two overs later. Nazir, looking in great touch, was late to react to a quick single call from Younis Khan and found himself short when Uthappa crashed the stumps. 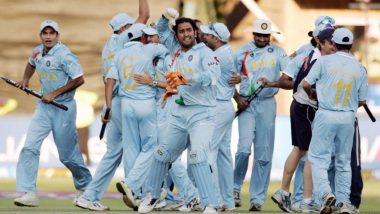 India beat Pakistan by five runs to win the 2007 ICC T20 World Cup. It was India’s biggest night in cricket since 1983 and of course before 2011 happened. It was also the start of many things in Indian cricket. MS Dhoni was playing his first tournament as a captain and leading a young brigade that would in future serve Indian cricket for so many years and lead the nation to many trophies. 13 years have passed since then. Dhoni, who made his debut in his tournament as a captain, retired from international cricket this August. Many from that playing XI went before him with Rohit Sharma the only player to still be active in international cricket. As India celebrates its 13th anniversary of 2007 T20 World Cup win, let's take a recap of the IND vs PAK final match.

Dhoni had won the toss and opted to bat first. India had beaten Australia to reach the final while Pakistan defeated New Zealand to get there. It was a blockbuster end to a tournament that in future was going to be the most popular format and most followed among the fans. But India dealt with a blow even before a ball was bowled in the final. Virender Sehwag, one of the few experienced players in the team, was ruled out of the final with a groin injury. Yusuf Pathan, his replacement, was going to make his India debut in the final.

Pathan senior was famous for his hard-hitting instincts and ability to clear the long ropes in Indian domestic circuit. But this was a World Cup final. Just six months ago, India had fluffed their chances and were knocked out of the 50-over World Cup after disappointing defeats to Bangladesh and Sri Lanka in the group stages. But this was a young brigade. Fearless, brave and opportunistic all of them.

And so Yusuf and Gautam Gambhir took the crease. Mohammad Asif started with the ball for Pakistan. His first three deliveries produced singles before Pathan announced his arrival with a straight-six. This was a man facing his only second delivery in his India international career. Remember Rishabh Pant against England in 2018 Test, anyone? Pathan hoicked Asif for another four before the pacer sent him back. With Pathan gone, India’s run-rate dropped from 10 per over to close to 8. Gambhir and new batsman Robin Uthappa dealt mainly in singles. They were looking to get in before going big.

Uthappa got a boundary in the fifth over, which was India’s first since Pathan’s dismissal, but perished trying to break free from the shackles. Gambhir though carried on with his game finding quick singles and twos and clearing the loose balls to the boundary. He especially took on spinners Shahid Afridi and Mohammad Hafeez, hitting the latter for two fours in one over and Afridi for a four and six. Gambhir got to his half-century in 38 deliveries with a single off Umar Gul after he had smashed the pacer for a boundary through point to move to 49.

Yuvraj, India’s player of the tournament, at the other end, however, struggled against pace and fell trying to pull Gul off a half-length delivery. MS Dhoni came and went in space of 10 deliveries and soon India from being comfortable at 110/2 were down to 111/4 in 15.2 overs. When Dhoni departed in the 16th over, India had not hit a boundary for two overs. They stretched for another two before Gambhir broke free with a six over square leg in the 18th over. But Gul eventually had the final laugh. He got Gambhir with a low full toss with Asif taking a simple catch at short fine-leg.

It was then left to Rohit Sharma to steer India to a great finish. When Gambhir went in the final ball of the 18th over, India were on 130/5 with two overs left to play. Rohit though up to the task. He responded with consecutive boundaries from full tosses in the first two deliveries of Yasir Arafat’s 19th over. India took 14 off that over and 13 of Sohail Tanvir’s final over, which included a six to mid-wicket, to set Pakistan a 158-run target.

If they were scrapping for runs with the bat, India were inspired with the ball. RP Singh had Hafeez caught at second slip in the first over. As India celebrated, Pakistan found themselves at 4/1 chasing 158 for a first ICC trophy since 1992. But the game was far from over. If India were excited after the first over, Pakistan fans were at the end of the second over. Sreesanth came to bowl the second over and conceded 21 with Imran Nazir taking the pacer to cleaners with two sixes and as many fours. But India responded with a wicket at the other end. Singh was at work again and sent Kamran Akmal’s stumps flying.

But there was no stopping Nazir. His answer to the wicket was a boundary through fine leg. Sreesanth came back and bowled a maiden to Younis Khan. The drama was, however, to come two overs later. Nazir, looking in great touch, was late to react to a quick single call from Younis Khan and found himself short of crease when Uthappa crashed his stumps with a direct throw. Nazir had smashed 33 off 14 with four boundaries and two maximums and this was an important wicket for India. Perhaps their game-changer. With the dangerous Nazir gone, Pakistan’s chase took a beating with Shoaib Malik and Younis failing to keep up the ante. Younis perished trying to find a boundary.

Irfan Pathan was then introduced into the attack and he responded with a two-wicket over on the second go. Malik was the first man to depart after failing to connect a pull while Shahid Afridi went out for a first-ball duck in a World Cup final trying to clear mid-off. With Malik gone and them behind in the chase, Pakistan needed Afridi to take them close but he decided otherwise and brought his fall.

It was left to Misbah-ul-Haq from there and he ensured he was on strike when Pakistan needed six runs from the final four deliveries to lift the World Cup title. Pakistan were on 76/5 when Misbah arrived and saw Afridi mishit his first ball and go back. The final was hinging on his shoulders. Misbah dealt in singles. He was helped by Arafat, who hit two boundaries and scored 15 off 11 deliveries, and Sohail Tanvir, who smashed 12 off four deliveries.

Misbah only went big when Pathan broke Arafat’s defence. Pakistan needed 54 from four overs. Harbhajan came to bowl the crucial 17th over and Misbah responded with three sixes as Pakistan took 19 from that over. All three hits were over midwicket and clean into the stands. Sreesanth came next and Tanvir took the mantle of finding boundaries. He took Sreesanth for 15 and left giving his side to chase down 20 from 12 deliveries.

Once again it was left to Misbah to take Pakistan home. He left himself with 13 to get off the final over after Asif edged RP Singh’s final ball through the third-man. Pakistan needed 13 with one wicket in hand and Dhoni had to decide between Harbhajan and Joginder Sharma for the final over. It was in so many ways going to decide his fate as a captain, India’s fate as a cricketing super-power, the advent of the Indian Premier League, the future of T20 cricket and so much more. For Pakistan, it was going to be their first win over India in an ICC tournament. For both, it was the end to their search for an ICC title for decades.

The legend goes Dhoni asked Harbhajan, who after conceding 19 off his previous over was unsure of defending 12. It was then left to the little experienced Joginder to defend 12 runs and take India home. Dhoni had trusted him to defend 21 against Australia in the semi-final and he had done it with aplomb. But this was a World Cup final.

So Joginder stepped up with Misbah on strike. Misbah was on 37 from 36 deliveries with three sixes to his name. The first delivery was a good length ball wide outside the off-stump. A big wide called. He was nervous. The entire country was. The next delivery was another good length delivery and a dot. Pakistan needed 12 off five deliveries. India one wicket.

The third was a full toss on the off-stump and Misbah smacked it straight over the bowler’s head. A big six. Pakistan needed six from four deliveries. Surely from here. India’s shoulders dropped. Joginder turned to stumps line and bowled another full delivery but on stumps. Misbah, who had just smacked a powerful hit, turned creative. He went for a cheeky scoop behind the wicket.

A full-length delivery on the stumps, Misbah could have driven it anywhere on both sides. Instead, he turned to an outrageous shot with the trophy on the line. The ball went up high on the air and Sreesanth had just been brought in from fine-leg to short fine-leg. He watched the ball and that was that.

(The above story first appeared on LatestLY on Sep 24, 2020 07:30 AM IST. For more news and updates on politics, world, sports, entertainment and lifestyle, log on to our website latestly.com).