India vs South Africa, 1st Test 2019, Key Players: Rohit Sharma, Kagiso Rabada, Wriddhiman Saha and Other Cricketers to Watch Out for in Visakhapatnam 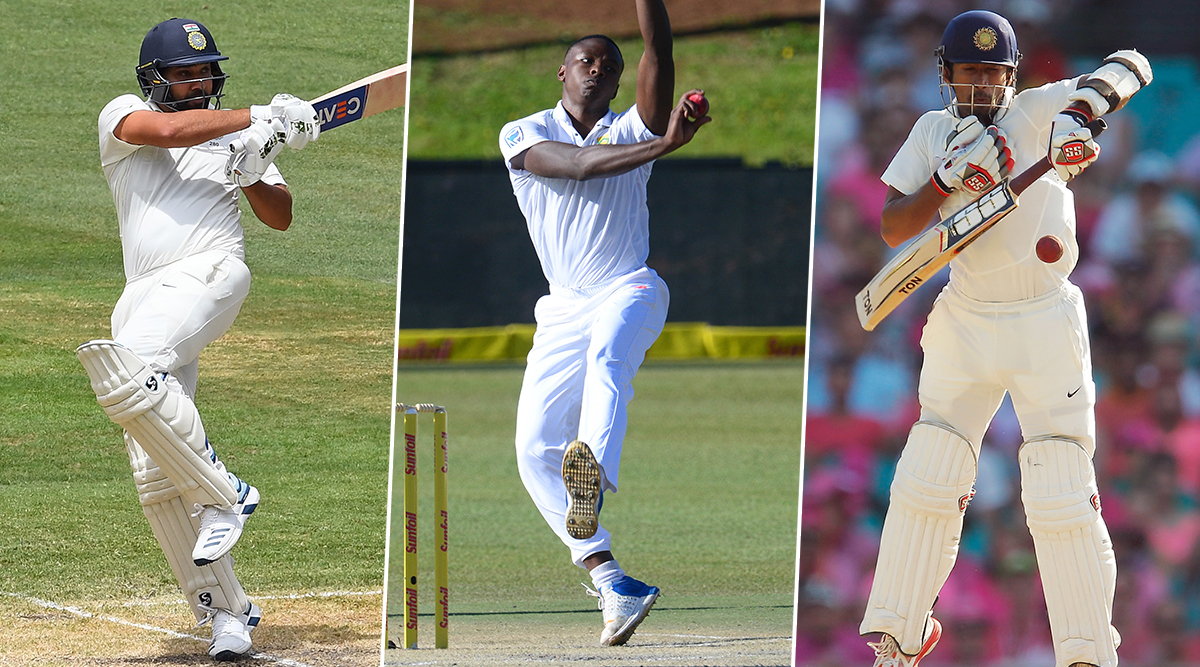 The much-awaited India vs South Africa 2019 Test series is set to start on October 2. The first of the three matches will be played at VDCA Stadium in Visakhapatnam. The series will also start South Africa’s campaign in the World Test Championship and the Proteas will aim to get off to a good start. Virat Kohli and Co are favourites to clinch the three-match rubber. However, South Africa also have some proven match-winners in their line-up who turn the tables around very quickly. A valiant team effort is required to win a Test match. However, the thrill of an encounter is also enhanced by individual efforts and we will focus on five players who can thrive in the 1st India vs South Africa 2019 Test. India Vs South Africa, Cricket Score 1st Test Match.

The T20I series between India and South Africa ended in a 1-1 draw and both the teams displayed great effort in order to take their team over the line. Players like Quinton De Kock and Kagiso Rabada who shined in the shortest format will aim to extend their form in Tests and defeat India in their own den.

For hosts, Rohit Sharma will be in focus as the veteran is all set to open the innings for the first time in Tests and will look to seal the position. So, let’s have a look at five players to watch out for the 1st India vs South Africa 2019 Test. India vs South Africa 1st Test 2019, Match Preview: Rohit Sharma and Wriddhiman Saha in Focus As Virat Kohli and Co. Take On Proteas in Visakhapatnam.

The 32-year-old opener has a stellar record in the limited-overs format and now he has the opportunity to start the innings in Tests as well. The veteran has been around the team for a while but never cemented his position in whites. However, the upcoming series is a great opportunity for the Indian stalwart to play some staggering innings and revive his Test career.

The right-arm pacer is one of the best bowlers in the current era and also holds the second position in the ICC Test bowler’s ranking. Rabada started his Test career on the Indian soil in 2015 and after four-years, the bowler is coming back as a seasoned bowler to the same place where he started. Rabada took a three-wicket haul in the third T20I and will aim to rattle the Indian batsman in the first Test as well.

The wicket-keeper batsman was brilliant in the T20Is and his performance will be critical in the context of the series. The southpaw has a brilliant record at the Test level and is a formidable force both behind and in front of the wickets. De Kock will be challenged by the spin duo of R Ashwin and Ravindra Jadeja. It will be exciting to see how the 25-year-old tackles the Indian bowlers.

Many eyebrows were raised on the Indian team management when Ashwin warmed the benches in the two-match Test series in West Indies. However, the off-spinner will feature in the Test series and will try to prove his mettle again. The 32-year-old has an astonishing record in the home pitches, which the hosts will vary off.

The Bengal wicket-keeper will make a comeback in the Indian Test XI after almost 20 months and will eye to perform even better than before. The veteran beat Rishabh Pant in the race and grabbed the position. So, Saha will look to justify the decision and seal the spot again. The cricketer will have to prove his worth as a batsman too and South African bowlers will certainly put up a good challenge.

The last time when India and South Africa played a Test series in India, the hosts clinched the four-match series 3-0. The Faf du Plessis-led Proteas side will want to put up a different performance this time around and get off to a good start in the ICC Test Championship. However, India will look to continue his dominance and clinch another Test series at home.