India vs West Indies, 3rd T20I 2019, Key Players: Kieron Pollard, KL Rahul, Sheldon Cottrell and Other Cricketers to Watch Out for in Mumbai 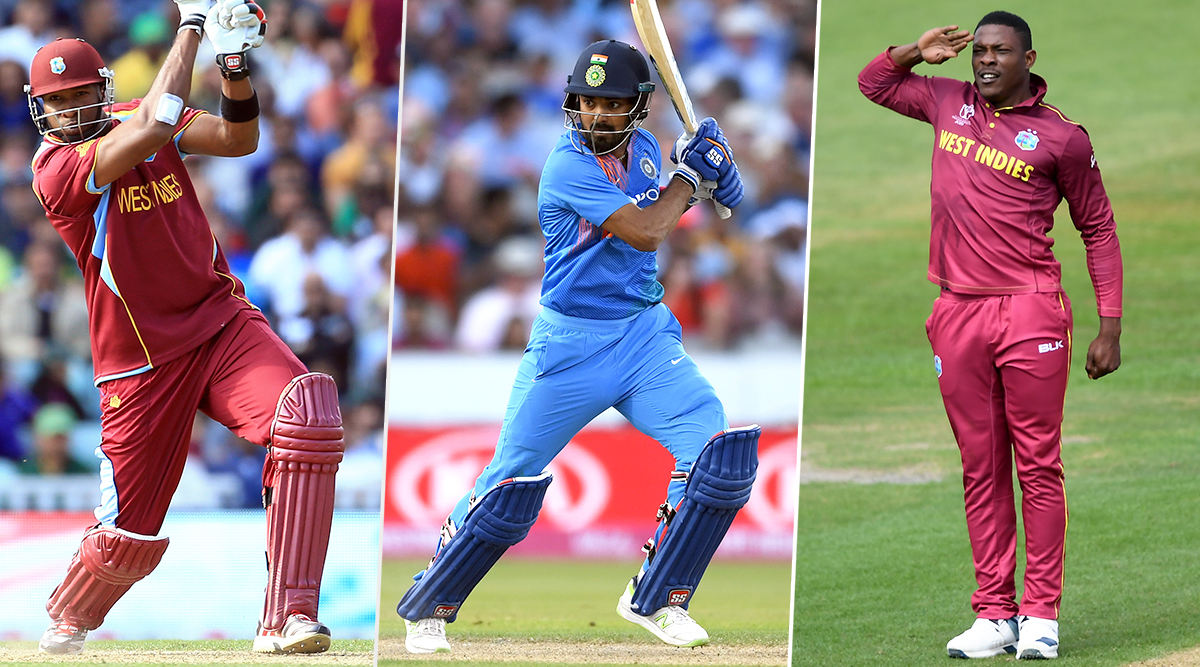 After two blockbuster matches, India and West Indies are all set to tussle in the third and deciding T20I of the series at Wankhade Stadium in Mumbai on December 11. The series is perfectly poised at 1-1 and both the sides must leave no stones unturned to clinch the match. Caribbean skipper Kieron Pollard has been playing for IPL side Mumbai Indians since a decade and will look to use all his experience to get the desired result. On the other hand, Indian opener is one big hit shy from becoming the first Indian batsman to muster 400 international sixes.  India Vs West Indies, Cricket Score 3rd T20I Match.

The Wankhade track is generally known to favour the batsmen which means one can expect a run-feast here too. Skipper Virat Kohli played a scintillating knock in the opening encounter and the visitors must vary off him. Young guns like Rishabh Pant and KL Rahul have also shown great promise in the series and will be roaring to play a substantial knock. For West Indies, Evin Lewis, Shimron Hetmyer and Nicholas Pooran can change the course of the match in no time and the Indian bowler need be at their best in order to restrict them. So, as the series-finale takes a countdown, let’s look at five players who can come good in the third T20I. India vs West Indies, 3rd T20I 2019: Virat Kohli vs Kesrick Williams & Other Exciting Mini Battles to Watch Out for in Mumbai.

The Indian opener looked at his prime in the opening T20I of the series where he scored 62 runs and helped his side chase a total of 207 runs. He wasn't able to leave a mark in the second T20I and will want to make up for that in the third one. The Wankhede pitch is known to favour the batsmen and the Men in Maroon will not want to see his blitz in the deciding clash.

West Indies might be the away team in the upcoming clash but their skipper will certainly be a home player. The all-rounder has been a part of IPL team Mumbai Indians for over a decade and is very well aware of the conditions. Pollard has also played many blistering knocks in the Wankhade Stadium and will want to use all his experience in order to guide his side to a series victory.

The first two T20I of the series might have been high-scoring thrillers but Cottrell looked at his prime in both the outings and didn't give the Indian batsmen many chances to free their arms. Bowling against the potent Indian batting line-up, the pacer was phenomenal with the new ball and in the death overs as well. Cottrell will again have the onus put up a similar or even better show and power his team to a historic win.

After facing a four-match ban, Pooran made an impeccable comeback in the second clash and didn't take long in making a mark. His 18-ball 38 helped his side register an eight-wicket win and level the series. Pooran possesses the ability to hit sixes at will which the Indian bowlers must be aware of.  The southpaw also has a T20I fifty in Indian soil and with the experience, he gained in IPL 2019, one can expect him to come good in Mumbai.

The wicket-keeper batsman faced a lot of criticism in recent times due to his 'careless' hitting and poor show behind the stumps. However, he played a small cameo in the second T20I and will to put an even better show in the last T20I of the series. Pant has two T20I fifties against West Indies and the southpaw will not mind adding another one in his records.

Wankhade Stadium is the same venue where West Indies thrashed the Men in Blue by 8 wickets in the semi-finals of 2016 T20 World Cup. The Indian side must not have forgotten that and will seek redemption in the decider. On the other hand, West Indies will again eye to rain fours and sixes to repeat the history one more time.