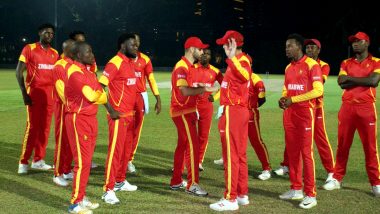 New Delhi, October 14: Zimbabwe was on Monday readmitted by the International Cricket Council (ICC) board following a meeting between the ICC Chairman and Chief Executive, Zimbabwe Cricket Chairman Tavengwa Mukuhlani, Sports Minister Kirsty Coventry and Gerald Mlotshwa, the Chairman of the Sports and Recreation Commission.

Zimbabwe were suspended in July 2019 following government interference in the running of the country's cricket board. ICC Chairman Shashank Manohar said, "I would like to thank the Zimbabwe Sports Minister for her commitment to the reinstatement of Zimbabwe Cricket. Her desire to work in support of Zimbabwe Cricket was clear and she has unconditionally complied with the conditions set down by the ICC board. Funding to Zimbabwe Cricket will continue to be on a controlled basis as part of a collective effort behind getting the game in Zimbabwe back on an even keel." ICC New Rules: International Cricket Council Scraps Boundary Count Rule in Super Over That Decided 2019 World Cup.

Zimbabwe will now be able to take up their place in the ICC U-19 World Cup in January and the ICC Super League later in 2020. Nepal has also been reinstated on a conditional basis following their 2016 suspension for breach of ICC regulations, which prohibit government interference and require free and fair elections. Latest ICC Test Batsmen Rankings 2019: Virat Kohli Closes In On Steve Smith To Become No.1, Mayank Agarwal IN and Rohit Sharma Drops OUT of Top-20 List.

Elections for the 17-member Central Working Committee of the Cricket Association of Nepal (CAN) were completed earlier this month, which paved the way for the reinstatement of the CAN. "Given the progress made in Nepal, a transition plan will now be developed for the Cricket Association of Nepal to support full compliance with the associate membership criteria, which will also involve controlled funding," Manohar said.

(The above story first appeared on LatestLY on Oct 14, 2019 11:08 PM IST. For more news and updates on politics, world, sports, entertainment and lifestyle, log on to our website latestly.com).