IPL 2020: Excited Fans React With Funny Memes and GIFs As BCCI Confirms Indian Premier League 13 to Be Played in UAE From September 19 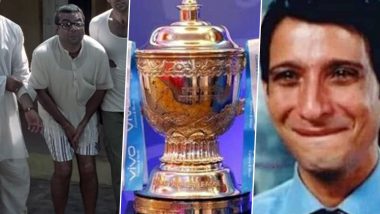 Fans reacted in ecstasy as the news of Indian Premier League 2020 being played in UAE from September 19 was confirmed by the BCCI. The apex Indian cricket board, following its Governing Council meeting on Sunday, confirmed that IPL 2020 will be held in UAE and will be played from September 19 to November 10. It also confirmed that teams will be allowed COVID-19 substitutes during the course of the tournament and can replace a player that has contracted the virus. IPL 2020 Update: BCCI Gets Official Clearance From Indian Government to Host Indian Premier League 13 in UAE.

The IPL 13 final will be played on November 10 (Tuesday) making it the first time that the franchise T20 league final will be played on a weekday instead of a weekend. Teams are expected to be allowed a maximum of 24 players, with additional replacements available in the form of COVID-19 substitutes. IPL 2020 Update: Vivo to Continue as Title Sponsor Amid India-China Border Tensions.

Everyone Must Pull Together

September 19 to Nov 10! It will be a long #IPL. And we have a weekday final but I don't think that will affect viewership much. Now awaiting details of how such a complex, difficult exercise will be carried out. Everyone must pull together!

Credit to the BCCI President

IPL Fans After the Announcement

RCB Fans After the Announcement

Ipl to begin from 19th Sep

Meanwhile, the tournament will involve 10 doubleheaders with match start timings moved up from regular 08:00 pm start to 07:30 pm. The board have also got the official clearance from the central government to host the tournament outside India due to the rapid increase in the number of COVID-19 cases in the country. Mumbai Indian are the defending champions of the IPL. They beat Chennai Super Kings by one run in last year’s final.

(The above story first appeared on LatestLY on Aug 02, 2020 10:22 PM IST. For more news and updates on politics, world, sports, entertainment and lifestyle, log on to our website latestly.com).

Comments
Tags:
BCCI Board of Control for Cricket in India (BCCI) Indian Premier League (IPL) ipl 2020 IPL 2020 Update IPL in UAE
Comments
You might also like