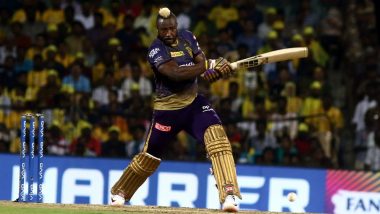 Abu Dhabi, September 19: Kolkata Knight Riders (KKR) may consider pushing Andre Russell up the batting order strategically in some matches, head coach Brendon McCullum said on Saturday. The former New Zealand captain said he is happy with the flexibility the squad has got. "The thing we want to pride ourselves is being a really smart team and utilising resources based on the match-ups. Andre Russell hit 54 sixes [52], I think, last year," said McCullum in a pre-season press conference.

"His game is suited to last 10 overs of a T20 game where he can really control. But there may be times when the match-ups are right, we can get Andre come in up the order. But that will be a horses for courses type of approach. The good thing is we have a lot of resources to choose from," he said. McCullum said the addition of England's World Cup-winning captain Eoin Morgan gives them a strong middle order this season. KKR Squad for IPL 2020 in UAE: Check Updated Players' List of Kolkata Knight Riders Team Led by Dinesh Karthik for Indian Premier League Season 13.

"We wanted to provide some resource around Russell's six-hitting ability. We also wanted to find some more leadership around skipper Dinesh Karthik and Morgan obviously won the World Cup with England and he has been the standout leader in World Cup. He was a guy we were desperate to get. Him batting in around Russell and Karthik provides us with a strong middle order."

(The above story first appeared on LatestLY on Sep 20, 2020 12:24 AM IST. For more news and updates on politics, world, sports, entertainment and lifestyle, log on to our website latestly.com).