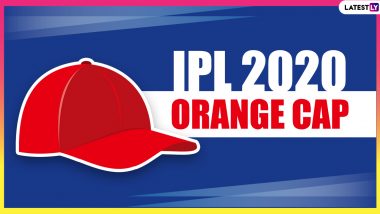 KL Rahul ended IPL 2020 as the highest run-getter and won the Orange Cap. The Kings XI Punjab captain scored 670 runs in just 14 games to end Indian Premier League (IPL) season 13 as the holder of the Orange Cap and also the cricketer with most runs this season. Shikhar Dhawan, who became the first-ever to score successive IPL centuries, finished second-highest run-scorer with 618 runs to his name in 17 matches. Sunrisers Hyderabad captain David Warner ended third in the chart with 548 runs in 16 games.  Now, let’s have a look at the leaderboard below.  IPL 2020 Purple Cap Holder List Updated.

The brand new season of Indian Premier League kick-started on September 19, 2020. With new sponsor and a new venue, we are presenting the fans, Dream11 Indian Premier League 2020 or IPL 2020. The 13th season of the exciting T20 tournament is scheduled to take place over the course of the next two months in the United Arab Emirates (UAE). While IPL 2020 trophy remains the cynosure of all teams, players will look forward to few prestigious individual achievements. One such accomplishment is becoming the Orange Cap holder. Who will be IPL 2020 Orange Cap winner? What is your Orange Cap winner prediction? From reigning Orange Cap holder David Warner of Australia for Sunrisers Hyderabad (SRH) to India's Virat Kohli for Royal Challengers Bangalore (RCB) to Rohit Sharma for Mumbai Indians (MI), there are plenty of names in mind. But who is going to be the one? Who will be the highest-scoring batsman, a player with most runs at the end of the tournament? Do not worry; we bring you all the latest information on IPL 2020 Orange Cap holder with most runs, winners' table and updated list of highest-scoring batsmen in Dream11 Indian Premier League Season 13 in UAE. IPL Orange Cap Winners List From 2008 to 2019: Ahead of IPL 2020 Orange Cap Title Holder Declaration, Here’s List of Leading Run-Scorers of the Past Seasons.

What is Orange Cap? What is its significance in IPL? What makes it so dear to participating batsmen in the tournament? Orange Cap is one of the Indian Premier League awards, which is presented to the leading run-scorer at the end of the tournament season. Orange Cap was first introduced on April 25, 2008, a week after the commencement of the inaugural season of the IPL. The batsman with most runs in the tournament during the course of the season gets to wear the Orange Cap while fielding, with the overall leading run-scorer at the conclusion of the tournament winning the actual Orange Cap award on the day of the season's final. Former New Zealand skipper Brendon McCullum while playing for Kolkata Knight Riders (KKR) was the first player to become Orange Cap holder and got to wear the Orange Cap, and but it was Australian Shaun Marsh representing Kings XI Punjab (KXIP) who became the first winner of Orange Cap award.

For IPL 2020, there will be eyes on biggies like Virat Kohli of Royal Challengers Bangalore, David Warner of Sunrisers Hyderabad, Rohit Sharma of Mumbai Indians, Steve Smith and Jos Buttler of Rajasthan Royals, Glenn Maxwell, Chris Gayle and KL Rahul of Kings XI Punjab. Here's the updated list of IPL 2020 Orange Cap holders who will battle each other to end up on top of the table.

The then IPL chairman and commissioner Lalit Modi said of the initiative, "Cricket is often remembered and recorded as statistics and not by material distinctions. The DLF Indian Premier League will create a distinction for the best performing batsman, which will be cherished and valued by each player through this initiative. The purpose of this initiative is to be innovative, create another unique piece of history that sets the DLF Indian Premier League apart from the crowd, and to reward outstanding achievements by the players." Of course, there is no Lalit Modi in IPL and no DLF, but the spirit of cricket remains intact. The noble idea of recognising an individual's efforts remains unscathed. It will truly be an exciting experience to follow the race among star batsmen to become the Orange Cap holder of IPL 2020.

(The above story first appeared on LatestLY on Sep 28, 2020 12:00 AM IST. For more news and updates on politics, world, sports, entertainment and lifestyle, log on to our website latestly.com).