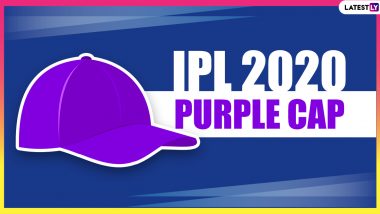 Delhi Capitals are on the top fo the Indian Premier League 2020 points table and most of it is down to Kagiso Rabada, who is also the leading the IPL 2020 Purple Cap list. Kings XI Punjab's Mohammed Shami is on the second spot while RCB legspinner Yuzvendra Chahal climbed to third in the leaderboard. Jasprit Bumrah and Jofra Archer make the top five. Trent Boult, Rashid Khan and Sam Curran also remain in contention. So scroll below to check the IPL 2020 leaderboard for highest-wicket takers this season. IPL 2020 Orange Cap Holder Batsman With Most Runs: Winners’ Table and Updated List of Leading Run-Scorers in Dream11 Indian Premier League Season 13 in UAE.

If foreign players have been dominating Orange Cap winners' list, Purple Cap witnesses the dominance of Indian bowlers. In fact, eyes will be on the likes of Jasprit Bumrah, Yuzvendra Chahal, Ravichandran Ashwin, Mohammed Shami, Deepak Chahar to make it big this time around. Among the foreign stars, we got the likes of Imran Tahir, Trent Boult, Sheldon Cottrell, Lungi Ngidi who will also be pumped up to wear the prestigious Purple Cap.

The then IPL chairman and commissioner Lalit Modi said of the initiative, "We have seen over the course of the inaugural season of the League so far that bowlers have just as important a role to play in winning T20 matches as batsmen do." While Lalit Modi is no more part of this great venture, the idea of recognising bowlers' massive contributions in a team's success remains the same. We look forward to following every bowler and their efforts in Dream11 IPL 2020. Twenty20 is no more just a batsman's game, and bowlers have an equal say. And IPL recognises the spectacular efforts of a bowler by awarding him with Purple Cap. Yes, the leading wicket-taker or bowler with most wickets, bags the prestigious Purple Cap at the end of the tournament. So, who will it be this season

(The above story first appeared on LatestLY on Sep 28, 2020 12:06 AM IST. For more news and updates on politics, world, sports, entertainment and lifestyle, log on to our website latestly.com).