IPL Orange Cap Winners List From 2008 to 2019: Ahead of IPL 2020 Orange Cap Title Holder Declaration, Here’s List of Leading Run-Scorers of the Past Seasons 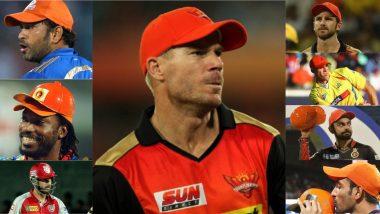 Another foreign player and an Australian to wear the coveted Orange Cap was Michael Hussey in IPL 2013. The Chennai Super Kings batsman scored 733 runs in 16 matches in IPL 6. However, the following year, it was Robin Uthappa who became second Indian after Sachin Tendulkar to become Orange Cap winner. The KKR player made 660 runs in 16 matches to become leading run-scorer in IPL 2014. David Warner became IPL 2015 Orange Cap holder at the end of the tournament while playing for SRH. The fiery Australia opener made 562 runs in 14 games.

David Warner went on to pick two more Orange Cap in IPL 2017 and IPL 2019. Yes, the 33-year-old is defending the coveted title. Indian skipper Virat Kohli who is leading RCB side will look forward to winning the Orange Cap again after wearing it the first time in IPL 2016. He holds the record of making the most runs in a single edition. Kohli had scored 973 runs in 16 matches in IPL Season 9. Kane Williamson of New Zealand while playing for SRH had bagged the IPL 2018 Orange Cap. Check all this information in the table format.

Who will win the Orange Cap in IPL 2020? Will it be David Warner again? Can the explosive Australian opener make it the fourth time in the cash-rich Twenty20 tournament or will the season see an Indian batsman rise to the occasion? In twelve seasons, only three Indian players have scored big to become Orange Cap holder. One will have to wait till the end of the tournament to know the winner of the latest edition.

(The above story first appeared on LatestLY on Sep 19, 2020 08:23 PM IST. For more news and updates on politics, world, sports, entertainment and lifestyle, log on to our website latestly.com).