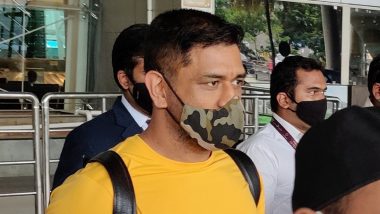 Chennai, August 14: Former India skipper Mahendra Singh Dhoni and some of his Chennai Super Kings (CSK) colleagues arrived here on Friday for a short training camp ahead of the Indian Premier League to be played in the in UAE from September 19 to November 10.

Dhoni will lead CSK in the 13th edition of the IPL, making an eagerly-awaited return to competitive cricket after a prolonged sabbatical since India lost to New Zealand in the 2019 World Cup semifinal. IPL 2020 Team News: Suresh Raina, Deepak Chahar and Other CSK Players Leave Together to Take Part in Training Camp (View Pic).

Suresh Raina, Deepak Chahar, Piyush Chawla and Kedar Jadhav are some other players who have reached the city for the week-long camp beginning Saturday at the M.A. Chidambaram stadium.

"Thala Dharisanam Reloaded!" CSK posted on their Twitter handle with a Dhoni pic at the airport, wearing a mask. IPL 2020 Player Update: Ravindra Jadeja Not to Participate in CSK’s Pre-Season Conditioning Camp.

The three-time IPL champions had organised a camp from March 2 ahead of the originally scheduled IPL from March 29 before the event was postponed owing to the coronavirus pandemic.

(The above story first appeared on LatestLY on Aug 14, 2020 08:16 PM IST. For more news and updates on politics, world, sports, entertainment and lifestyle, log on to our website latestly.com).