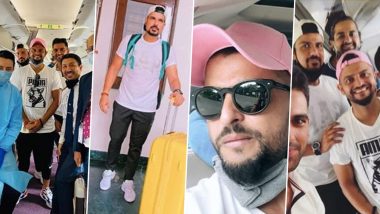 With IPL 2020 all set to go ahead in the United Arab Emirates (UAE) from September onwards, teams and players have started their preparations. Suresh Raina, Piyush Chawla and Deepak Chahar are some of the players who left for Chennai from New Delhi to attend the Chennai Super Kings’ training camp ahead of the latest edition of the Indian Premier League. IPL 2020 Player Update: Ravindra Jadeja Not to Participate in CSK’s Pre-Season Conditioning Camp.

The three-time IPL champions are one of the teams who have organized a training camp in India before leaving for UAE to take part in IPL 2020. CSK players are expected to take part in a six-day camp which will take place between August 15 and August 20. CSK on Friday (August 14) shared photos of the players on the way to take part in the pre-season preparations. IPL 2020 Player Update: MS Dhoni Tested Negative for Coronavirus, All Set to Join CSK.

CSK captain MS Dhoni is also expected to join the squad for the training camp soon after his results for the mandatory COVID-19 tests came out as negative. The 39-year-old underwent the tests on Wednesday in his hometown of Ranchi and the results were declared yesterday, which were said to be negative.

Indian all-rounder Ravindra Jadeja will miss the six-day training camp due to personal commitments aid CSK CEO Kasi Viswanathan. Harbhajan Singh is also expected to miss the camp but will join the team couple of days before their departure for UAE. The main focus of the camp will be primarily on the fitness of the players, along with some cricket training.

The 13th edition of Indian Premier League will be played in UAE from September 19 onwards and the final is expected to take place on November 10. Official scheduled is yet to be released by BCCI but the fixture list is expected to be out soon.

(The above story first appeared on LatestLY on Aug 14, 2020 02:33 PM IST. For more news and updates on politics, world, sports, entertainment and lifestyle, log on to our website latestly.com).