As Mumbai Indians stars touched Chennai ahead of IPL 2021, the franchise's official Twitter account shared a video of Ishan Kishan, skipper Rohit and Aditya Tare trying to speak Tamil. The caption, which was written in Tamil, translates to: "Hello Chennai! Shall we start the game? Mumbai Indians have checked in." 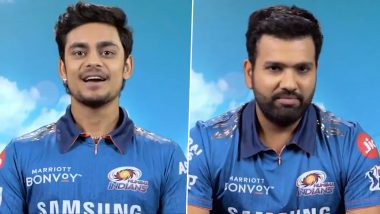 In the 56-second clip, Mumbai Indians players can be seen checking in at their hotel rooms with their family members. Later in the clip, some MI stars also gave a message to the local fans in Tamil. While Ishan Kishan talked about the Mumbai Indians family, Rohit explained how fans' support boosts the morale of the side. These players have indeed learned the native language quite well and would like to adapt to the local conditions soon as well. Meanwhile, let's look at how Rohit and others greeted their local supporters. IPL 2021 Schedule in PDF for Free Download: Get Indian Premier League 14 Venues, Full Time Table, Fixtures and Match Timings in IST.

Owing to the COVID-19 pandemic, no team will play at their home ground. Nevertheless, the five-time winners won't be a worried team as they have all their bases covered. The Men in Blue dominated the last season in UAE and clinched the title comprehensively. They now have a chance to become the first team to clinch three successive titles. However, it won't be a bread and butter task as all other sides would also be determined to get the glory.

(The above story first appeared on LatestLY on Apr 01, 2021 01:10 PM IST. For more news and updates on politics, world, sports, entertainment and lifestyle, log on to our website latestly.com).