IPL 2021 has been suspended for this season due to the growing COVID-19 cases in the bio-bubble. Twitter was buzzing with reactions and memes as fans expressed their sadness over the suspension of IPL 2021. Many took to social media to share how they looked forward to the IPL matches to get away from the grim situation in the country. 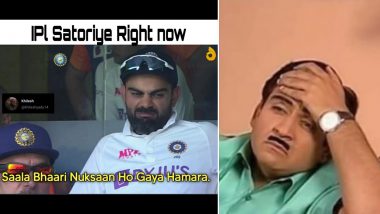 IPL 2021 has been suspended for this season, confirmed BCCI vice-president Rajeev Shukla after Sunrisers Hyderabad’s Wriddhiman Saha and Amit Mishra of Delhi Capitals became the latest players to test positive for COVID-19. Reports of Mishra and Saha testing contracting the virus comes after KKR’s Varun Chakravarthy and Sandeep Warrier and three non-playing members of the Chennai Super Kings contingent, including bowling coach Lakshmipathy Balaji, returned positive results on Monday (May 3) leading to the cancellation and postponement of the KKR vs RCB and RR vs CSK matches. IPL 2021 Suspended for This Season, Says BCCI Vice-President Rajeev Shukla.

Shukla, who is also the former chairman of the Indian Premier League, confirmed to news agency ANI that season 14 of the IPL has been suspended for this season after four players and three more tested positive for COVD-19 raising questions of a possible breach in the players' bubble. There has, however, been no official communication from the organisers or the franchises about the suspension of the IPL. IPL 2021 Matches Likely To Be Shifted Back to Mumbai As Concerns Over Positive COVID-19 Cases Grow.

Twitter was buzzing with reactions and memes as fans expressed their sadness over the suspension of IPL 2021. Many took to social media to share how they always looked forward to the IPL matches every evening to get away from the grim situation in the country and around them. Take a look at some top reactions on Twitter after reports broke that IPL 2021 has been suspended.

Cricket Fans After Hearing IPL 2021 Has Been Suspended

Virat Kohli and RCB Squad After IPL 2021 Gets Suspended

IPL Fans After Hearing the News

RCB, CSK, MI and DC Fans After Hearing IPL 2021 Has Been Suspended

Other Team Fans to RCB

Every IPL lover to RCB :- pic.twitter.com/ixQ876DX4n

Reports of Chakravarthy and Warrier testing COVID-19 positive broke on May 3 (Monday) and it was later confirmed that the KKR vs RCB has been postponed as the entire KKR contingent was now in quarantine. Soon it was also revealed three non-playing members of the CSK contingent tested positive for the virus. The Chennai Super Kings management asked the BCCI to postpone their next match against the Rajasthan Royals. Multiple reports have claimed that the BCCI is mulling over moving the remainder of the tournament to Mumbai.

(The above story first appeared on LatestLY on May 04, 2021 02:01 PM IST. For more news and updates on politics, world, sports, entertainment and lifestyle, log on to our website latestly.com).