IPL 2022: From This Year, My Character Will Develop; Cricketing Skills Will Emerge Better, Says Chetan Sakariya

Delhi Capitals' left-arm seamer Chetan Sakariya feels that 2022 will be the year where his character and skills as a cricketer will flourish hugely. 2021 was a mixed bag for Sakariya, who lost his younger brother due to suicide and saw his father dying of Covid-19. 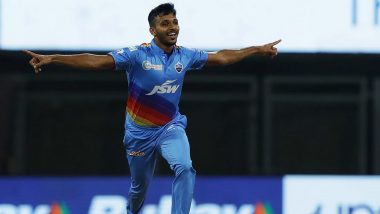 Mumbai, May 6: Delhi Capitals' left-arm seamer Chetan Sakariya feels that 2022 will be the year where his character and skills as a cricketer will flourish hugely. 2021 was a mixed bag for Sakariya, who lost his younger brother due to suicide and saw his father dying of Covid-19. But on the cricketing front, Sakariya had lots of things to be happy about, impressing everyone in his first season of IPL by picking 14 wickets for Rajasthan Royals. The good showing in Rajasthan's colours in the first half of IPL 2021 propelled him to make his ODI and T20I debuts for India against Sri Lanka in July. DC vs SRH, IPL 2022: It Was a Good Learning Experience in Managing Big Chase, Says Kane Williamson After Loss Against Delhi.

Now, in his second season of IPL with Delhi, Sakariya's focus is firmly on his development as a cricketer. "Personally, I have got to learn a lot. The first year went well for me but I have observed that with every cricketer. But for a cricketer, a lot depends on how his second year goes. This year is a little difficult but I feel that from this year, my character will develop and my cricketing skills will emerge better. The way I will handle pressure situations and if I take out one or two matches for the team, it will be good for my personal development and will be able to put up better performances in future," said Sakariya to IANS.

With Delhi having lots of pace options, it has meant that Sakariya has played just two matches in the tournament with overall figures of 1/61. The competition for pace bowling slots in Delhi's eleven is something which, according to Sakariya, has brought the pace group closer. "Delhi Capitals has all types of (bowling) options available, be it speed-wise, skill-wise or swing-wise. It motivates the fast bowlers to put their best foot forward because the margin of error is very less. At the same time, we are very good friends with each other and share our experiences, which is good for a fast-bowling combination." DC vs SRH, IPL 2022: Rishabh Pant Praises David Warner for His Brilliant Innings Against Hyderabad.

Despite sitting on the sidelines for the majority of the tournament, it has brought time for Sakariya to specifically work on perfecting his yorker. "After coming into DC, I have worked very hard on one thing: yorker. My yorker has now been strengthened a lot. Previously, I used to bowl 50 per cent yorker and if someone told me to bowl six balls, I could have executed only three." "Now, it has increased to four or five out of six. While sitting on the sidelines, I worked really hard on it. When the pitches were being made this year, I was seeing which ball will be more effective to add to my armoury. So, this is why I have worked a lot on my yorker and has sharpened a lot more now."

In his time with Delhi, Sakariya has been fascinated with how head coach Ricky Ponting pays attention to every player in the camp. "Longer the time I spend with DC, the more I am getting impressed with him. When the team is in a difficult situation, he lifts up all players and tries to create an atmosphere like when someone cracks a joke in the group. "He will come personally to you to say, 'You be prepared as per the match scenario as you can play anytime and are on our radar'. He takes care of each player individually. So, I am getting more impressed by him in my time with DC."

Asked about how he sees Rishabh Pant as the captain, Sakariya remarked, "Rishabh bhaiya is calm. He himself observes the whole situation and pressure scenarios around it. He takes the responsibility on himself to prove that he can take the team out of this situation. When players do well, all the credit goes to him but the pressure and difficult situation, he takes it on himself, which is what a leader does." Sakariya's arrival in Delhi has also reunited him with his former Rajasthan teammate, Bangladesh's Mustafizur Rahman. Sakariya revealed he has been trying to learn about keeping things simple and remaining calm from his fellow left-arm pacer.

"I had opened the bowling with him last year (in Rajasthan). But this year, Mustafizur tells to keep things simple all the time as the conditions are tough for fast bowling. He keeps saying 'keep it simple', bowl as per the field and see his strengths as well as weakness. "He comes prepared but when he comes in the match, he keeps things simple. What it does is that one can keep calm, on which he has mastery and I am working on it too. Whenever I have gone to him, he always keeps giving these suggestions."

(The above story first appeared on LatestLY on May 06, 2022 11:43 AM IST. For more news and updates on politics, world, sports, entertainment and lifestyle, log on to our website latestly.com).