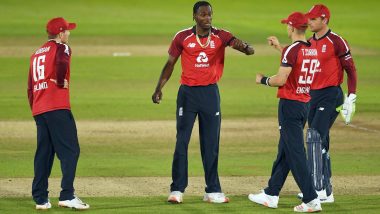 Jofra Archer is likely to miss the three-match ODI series against India and could also skip the start of IPL 2021, said reports. Archer has been struggling with his right elbow, which forced him to sit out of the second and fourth Tests earlier in the series. But he has played all five T20Is against India and was also expected to be part of the England squad for the three-match ODI series, which is scheduled to start later this month. But the speedster could head back to the United Kingdom (UK) after the conclusion of the T20I series on March 20 (Saturday) to treat the injured elbow. Chris Jordan Takes Stunning Relay Catch To Dismiss Suryakumar Yadav During India vs England 5th T20I Match (Watch Video).

According to a report from Daily Mail, Archer will return to the UK after the T20I series and will undergo treatment on the troublesome elbow. The 25-year-old will, however, avoid surgery on the elbow and is likely to take a third injection to make himself available for season 14 of the Indian Premier League. The report states that the medical staff have identified a deterioration on the elbow joint during the course of the T20I series. Dawid Malan Becomes Fastest Player To Reach 1000 T20I Runs, Achieves Feat Against India.

England’s managing director, Ashley Giles, has reportedly been informed about Archer’s elbow problem and the speedster is likely to be rested for the three-match ODI series, which will enable Archer to get treatment on the elbow. Archer is also likely to skip the start of IPL 2021 as he will recover from the elbow injury. But the Rajasthan Royals cricketer is expected to play the tournament at some stage.

Archer was named the player of the tournament last IPL. He picked 20 wickets and also scored 113 runs with the bat in IPL 2020 but could not lead Rajasthan Royals to the playoffs as the Steve Smith-led side finished at the bottom of the standings after winning only six games.

(The above story first appeared on LatestLY on Mar 20, 2021 10:46 PM IST. For more news and updates on politics, world, sports, entertainment and lifestyle, log on to our website latestly.com).