Caribbean pacer Kesrick Williams himself opened up about the whole saga and revealed the banter between him and Virat Kohli during the T20I match in 2019. "Every ball I bowled he said something but, honest to god, the only thing I said to him was, ‘mate, just bat and shut up. Really, you sound like a child.’ That’s all I said to Kohli,” he said. 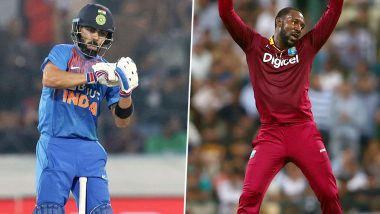 Caribbean pacer Kesrick Williams hogged a lot of headlines for his banter with Virat Kohli during West Indies’ 2019 Tour of India. The right-arm pacer has a knack of doing a unique ‘notebook celebration’ after getting a wicket. However, during the first T20I of the series, Kohli smashed Williams to all the parts of the ground and added even mocked him by imitating his unique celebration. During the post-match conference, the right-handed batsman revealed that he did it because Williams gave him the send-off during a 2017 T20I game in Jamaica. Now, Williams himself opened up about the whole saga and revealed the banter between him and Kohli during the match. Alastair Cook Names Virat Kohli in List of 5 All-Time Greats.

The pacer ever claimed that Kohli said that he didn’t like the celebration during the 2017 T20I match. “After the game finished, I went to shake his hands, Kohli said good bowling but the celebration eeeh and he walked off. He didn’t walk off rudely. But it was the end of our greeting. ‘I felt good playing against you’, he’s the best player in the world, whatever, whatever. We went our separate ways,” he added.

Williams further said that Kohli initiated the verbal battle with him during the Hyderabad T20I last year. “Last year in India, as soon as Mr Virat Kohli walked into bat, he walks straight at me and says, ‘the notebook celebration thing is not going to work here tonight. I’m going to make sure it won’t work’.”

“And I was like, ‘Seriously! the episode is back from 2017’. Every ball I bowled he said something but, honest to god, the only thing I said to him was, ‘mate, just bat and shut up. Really, you sound like a child.’ That’s all I said to Kohli,” he added.

According to Williams, his comment didn’t go down well with the Indian skipper as he kept saying something to the bowler. "All he really heard was just, ‘can you just bat and shut up’, the part about child and whatever he didn’t hear because I was walking back. That’s all I said but he kept talking,” he said. “He didn’t say anything rude, he didn’t say anything disrespectful. All he said was ‘this celebration will not work here tonight, I’m gonna make sure it didn’t work’ Kesrick further said.

Kohli scored 94 of just 50 deliveries in that match and guided the Men in Blue to a six-wicket triumph. On the other hand, Williams gave away 60 runs off just 3.4 overs. Although, the pacer made a good comeback in the next game and scalped Kohli’s wicket. However, the third and final round of the mini-battle went to Virat Kohli who scored 70 runs off 29 deliveries in the last T20I and helped his side clinch the series 2-1.

(The above story first appeared on LatestLY on May 11, 2020 06:11 PM IST. For more news and updates on politics, world, sports, entertainment and lifestyle, log on to our website latestly.com).