Justifying their five-time champions tag, Mumbai Indians pulled off a heist against KKR to register their first win of VIVO Indian Premier League (IPL) 2021. Chasing 153 at the MA Chidambaram Stadium in Chennai, KKR were in command for most of the contest, and their victory just looked a mere formality but MI bounced back brilliantly and secured a 10-run win. 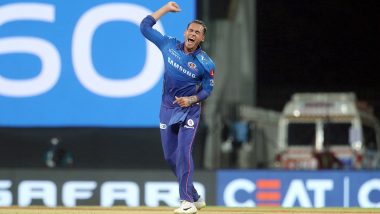 Justifying their tag of five-time champions, Mumbai Indians pulled off a heist against KKR to register their first win of VIVO Indian Premier League (IPL) 2021. Chasing 153 at the MA Chidambaram Stadium in Chennai, KKR were in command for most of the contest, and their victory just looked mere formality.  Openers Nitish Rana and Shubman Gill added 72 runs for the first wicket, with the former scoring his second successive fifty. However, Rahul Chahar led Mumbai’s fightback with a magnificent four-wicket haul. Still, KKR looked in a comfortable position, needing 31 in the last five overs with six wickets in the bank. However, Jasprit Bumrah and Trent Boult’s staggering death bowling took the defending champions to a 10-run triumph. KKR vs MI Highlights of VIVO IPL 2021.

Earlier in the game, KKR skipper Eoin Morgan elected to field first after winning the toss. The decision proved to be spot on as Quinton de Kock fell prey to Varun Chakravarthy in the second over. However, skipper Rohit Sharma joined Suryakumar Yadav in the middle, and the duo brought MI’s innings back on track. With the scorecard reading 86/1 in 10.2 overs, the defending champions were all set for some fireworks in the end overs. Contrarily, they lost the plot out of nowhere and lost their last seven wickets for 38 runs. Andre Russell, standing in his 350th T20 appearance, was the wreaker-in-chief for KKR. He took a magnificent five-wicket haul as MI were bundled out for 152 which eventually proved to be enough. Meanwhile, let’s look at the stat highlights of the game. IPL 2021 Points Table Updated.

# This was KKR's 12th defeat in last 13 IPL games against Mumbai Indians.

# Russell completed his five-wicket haul in just two overs, which is the least number of balls taken by a bowler to take a five-fer in IPL.

# Russell’s figure of 5/15 is best for a KKR bowler in IPL and also best figures against Mumbai Indians.

# The Caribbean pacer now also holds the record of third-best bowling figures in a losing cause in IPL.

Mumbai Indians have got their mojo back, and all other teams must beware of them. Rohit Sharma will next marshal his troop against David Warner’s Sunriers Hyderabad (SRH) at the same venue on April 17. On the other hand, KKR must be livid with their collapse. They’ll have a point to prove in their next assignment against Virat Kohli’s Royal Challengers Bangalore on April 18.

(The above story first appeared on LatestLY on Apr 14, 2021 12:01 AM IST. For more news and updates on politics, world, sports, entertainment and lifestyle, log on to our website latestly.com).