Know All About 1996 Cricket World Cup: History, Participants and Winner of the Sixth Edition of World Cup 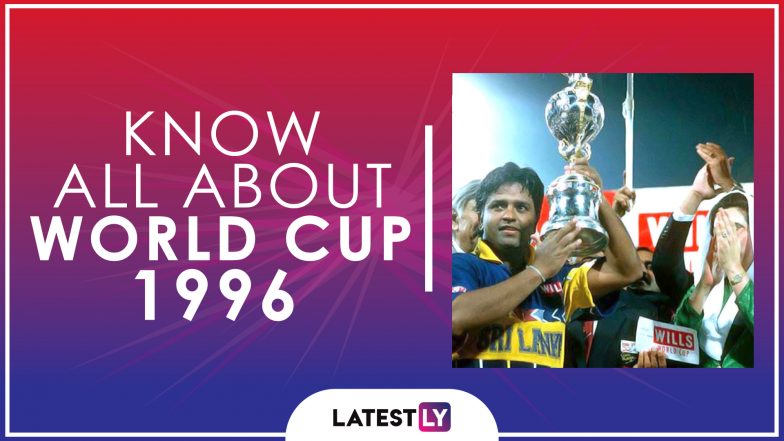 The 1996 Cricket World Cup was also known as Wills World Cup. It was the second occasion after 1987 when the world was played in the Indian Sub-continent. India, Pakistan and Sri-Lanka hosted the sixth edition of the world cup. It was played between February 14 and March 17. The 1996 World Cup was held across 17 venues in India, six venues in Pakistan and three venues in Sri Lanka. A total of 37 matched were played in the tournament including the quarterfinals, semifinals and the final. When is India vs Pakistan Match in ICC Cricket World Cup 2019 in England? Seventh Time Arch-Rivals IND And PAK Will Go Head-To-Head in CWC.

Participating Teams and Format: A total of 12 teams participated in the 1996 World Cup. These 12 teams were divided into two groups of six teams each. India, Sri Lanka, Australia, West Indies, Kenya and Zimbabwe formed Group A while Group B comprised Pakistan, South Africa, New Zealand, England, Netherlands and the United Arab Emirates. Each team played five matches each in the group stages. After the group stage matches, the tournament entered the knockout stage. Top four teams each from both the groups qualified for the quarterfinals. In the 1996 World Cup India, Sri Lanka, Australia and West Indies qualified for the semifinals. ICC Cricket World Cup 2019 All Teams Squad: Full Players List of Nations Participating in CWC 19.

Semi-Finalists: In the first quarterfinal Sri Lanka beat England, while in the second quarterfinal India beat Pakistan. In the third quarterfinal, West Indies defeated South Africa and in the fourth quarterfinal, New Zealand was defeated by Australia. In the semi – Indian was thrashed by Sri Lanka by 131 runs, while Australia beat West Indies by five runs to reach the finals. ICC Cricket World Cup 2019 Warm-up Matches Live Streaming in India: Get Telecast and Online Stream Details of CWC Practice Games in IST.

In response, Sri Lanka achieved the target of 242 runs in just 46.2 overs with the loss of three wickets. De Silva was the top scorer from Sri Lanka’s side. He scored 107. Apart from de Silva Asanka Gurusinha also played a handy role in Sri Lanka’s victory. He scored 65 runs. Both the batsmen anchored the Lankan batting after they lost both Sanath Jayasuriya and Romesh Kaluwitharna with just 30 runs on the board.

India’s Sachin Tendulkar emerged as the highest run-scorer in the tournament and scored 523 runs in seven matches, including two centuries. Tendulkar’s countryman Anil Kumble was the highest wicket-taker with 15 wickets.