Kuldeep Yadav Disappointed To Be Left Out of England Tour, Hopeful of Getting Picked in India Squad for Sri Lanka Tour

India will play the WTC final in Southampton from June 18, followed by a five-Test series against England, starting August 4 in Nottingham. Virat Kohli is leading India on the three-and-a-half-month tour of England. 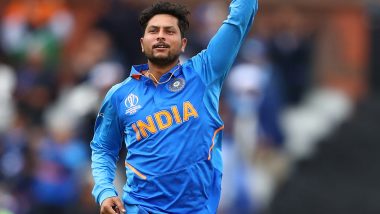 Mumbai, June 6: Spinner Kuldeep Yadav is disappointed at missing out on India's tour of England for the World Test Championship (WTC) final against New Zealand and a five-match Test series against the hosts. He hopes he would get picked for upcoming tour of Sri Lanka.

"I am disappointed not to be part of the Indian team because I wanted to go and perform and contribute to the team's win. These things happen, yes you are sad, but at the same time you are ready to perform in the next opportunity," Yadav said. However, the Chinaman bowler was hopeful of securing a spot in the limited-overs series against Sri Lanka in July.

"I haven't gone there [to England], so hopefully I will go to Sri Lanka and get the chance to perform there. Cricket should continue happening, every player is sad when he is not in the team, everyone wants to remain in the team but sometimes the situation is such that you are not part of the team," Yadav told India News. Tim Southee Fires Warning to India Ahead of ICC WTC Final, Picks 6/43 Against England at Lord’s.

India will play the WTC final in Southampton from June 18, followed by a five-Test series against England, starting August 4 in Nottingham. Virat Kohli is leading India on the three-and-a-half-month tour of England.

Yadav, who has played only seven Tests and has taken 105 wickets in 63 ODIs, feels that given the way the team has been playing in the last few years, it is better placed than New Zealand to win the WTC final.

"The sort of cricket we are playing for the last three-four years and the positive atmosphere in the team, even when we play away we treat it as a home series, the way the team played in Australia and then against England, I feel we should and we will win," he said.

(The above story first appeared on LatestLY on Jun 06, 2021 11:18 PM IST. For more news and updates on politics, world, sports, entertainment and lifestyle, log on to our website latestly.com).