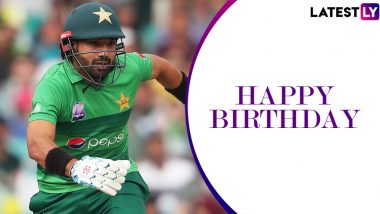 Mohammad Rizwan celebrates his 28th birthday on June 1, 2020 (Monday). Born in 1992, the talented wicket-keeper batsman has represented the Pakistan national team in 56 international matches and his currently the team’s first-choice wicket-keeper batsman after former captain Sarfaraz Ahmed was dropped post the ICC Cricket World Cup 2019, where Pakistan was knocked out of the league stages. Rizwan has already shown enough promises of how fine a cricketer he is with two centuries in his last four ODI matches.

Born in Peshawar, Rizwan made his debut for Pakistan against Bangladesh in April 2015 and scored a half-century in his debut innings. He scored another four innings later and was competing for the wicket-keeper’s position with Sarfaraz Ahmed. But a string of low scores followed by Sarfaraz getting appointed as the national captain, Rizwan lost his place in the national team and returned to the domestic circuit where he excelled. Take a look at some interesting facts about the Pakistan wicket-keeper batsman.

He continued to excel in the domestic circuit and even hit his highest List A score in the 2018 Pakistan Cup and was also named the Player of the tournament in the 2019-20 National T20 Cup. Rizwan eventually made his return to the national team on January 27, 2019, against South Africa after Sarfaraz was rested. But with the latter dropped from captaincy towards the end of 2019 and for his poor form, Rizwan took his place as the first-choice keeper in the team.

(The above story first appeared on LatestLY on Jun 01, 2020 08:05 AM IST. For more news and updates on politics, world, sports, entertainment and lifestyle, log on to our website latestly.com).