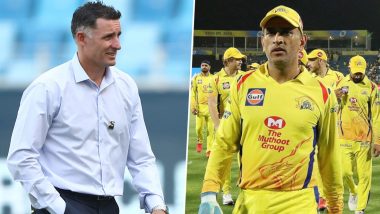 Former Australian batting great Michael Hussey picked his ‘fearsome’ all-time playing XI from the Indian Premier League (IPL). The left-handed batsman was himself a vital cog of the Chennai Super Kings (CSK) and is very well aware of the capabilities of the player. For the opening position, the southpaw went with Mumbai Indian’s skipper Rohit Sharma and Sunrisers Hyderabad opener David Warner. Although, Rohit is the most successful captain in IPL history, winning the title four times. However, in Hussey’s line-ups, he’s picked just as a batsman. Interestingly, Hussey didn’t select Chris Gayle for the top spot who is regarded as one of the most destructive batsmen to have graced the tournament. You Should Never Write Off Champions: Michael Hussey on MS Dhoni's Future.

At number three and four, Hussey went with Royal Challengers Bangalore (RCB) duo Virat Kohli and AB de Villiers. Both the mavericks have played numerous stellar knocks in the tournament. However, they have never been able to guide their side to the title. For number five and wicket-keeper of the side, the Aussie star went with CSK’s MS Dhoni. Unsurprisingly, the veteran has also been picked as the captain of the team. MI’s Hardik Pandya and Kolkata Knight Rider’s (KKR) Andre Russell are the two all-rounders in Hussey’s team.

Coming to the bowling department, the 2007 World Cup winner chose SRH pair of Rashid Khan and Bhuvneswar Kumar who have been the cornerstones of their side’s performance in recent times. RCB’s Yuzvendra Chahal was the other spinner in the team while MI’s Jasprit Bumrah will partner Bhuvi in the pace bowling department. Kings XI Punjab’s newly appointed skipper KL Rahul has been named as the 12th man of the team.

(The above story first appeared on LatestLY on Jul 03, 2020 05:33 PM IST. For more news and updates on politics, world, sports, entertainment and lifestyle, log on to our website latestly.com).