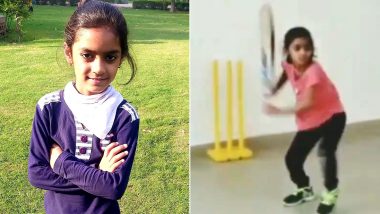 With IPL 2020 finally getting official permission from the Indian government to go ahead on UAE this year, several cricket fans are excited over the prospect of seeing CSK skipper MS Dhoni back in action. The former Indian captain has not played competitive cricket since India’s World Cup exit. So before the 39-year-old take field once again, seven-year-old Pari Sharma is garnering attention by emulating the cricketer's iconic Helicopter shot. Jasprit Bumrah Fan Imitates His Bowling Action; Mumbai Indians Pacer Urges Young Kid to ‘Keep Going’ (Watch Video).

Pari Sharma from Haryana has already been turning heads at such a young age and has been garnering a lot of praise on social media from several current and former cricketers for her cricketing abilities. And now one of her such videos while plying MS Dhoni's helicopter shot, has caught the attention of cricketer-turned commentators Aakash Chopra and Sanjay Manjrekar. MS Dhoni Helicopter Shot: Chennai Super Kings Posts Kids Version of Famous Dhoni Stroke As Captain Cool Turns 39 (Watch Video).

Aakash Chopra shared a video of the seven-year-old while playing the helicopter shot and also added his own unique commentary to the clip. Former Indian cricketer Sanjay Manjrekar also noticed the young girls cricketing skills and praised Dhoni for being an inspiration to budding cricketers.

I see now helicopter shot being actually practiced. Along with collecting the ball very close to the stumps as keeper, this is another cricketing technique Dhoni has popularised as great options for budding cricketers. https://t.co/vJcurZyyFh

Speaking of MS Dhoni, the former Indian skipper will take finally the field in more a year when he leads Chennai Super Kings in the upcoming edition of the Indian Premier League. IPL 13 will take place entirely in UAE and it will be the third time that the competition will be played outside India, 2009 and 2014 being the other two occasions.

The cash-rich league will begin on September 19 and stadiums in Abu Dhabi, Dubai and Sharjah will host all the games behind closed doors. Franchises have begun their preparation for the upcoming edition and will soon leave for UAE.

(The above story first appeared on LatestLY on Aug 13, 2020 02:54 PM IST. For more news and updates on politics, world, sports, entertainment and lifestyle, log on to our website latestly.com).