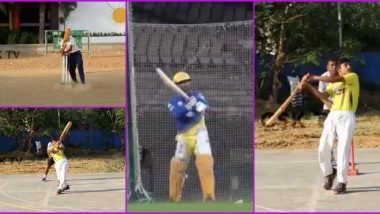 It is MS Dhoni's birthday, and social media is abuzz with fans wishing the former Indian cricket team captain. Dhoni was born on July 07, 1981, in Ranchi and now turns 39. The wicketkeeper-batsman is regarded as one of India's greatest captains and holds many records. Dhoni, apart from being a successful captain, is known for his skills with the bat and wicketkeeping gloves as well. The right-handed batsman has played many match-winning knocks and is known as one of the best finishers in the game. Dhoni has an unorthodox batting style with helicopter shot being his trademark stroke. MS Dhoni Birthday Special: Rare Pictures of Mahi Before He Became the Golden Boy of Indian Cricket (See Pics).

The wicketkeeper-batsman has smashed huge sixes, even on yorker-length balls, thanks to his helicopter shot. Dhoni's fans and youngster often copy his famous helicopter shot. Meanwhile, as Dhoni turns 39, Chennai Super Kings (CSK) shared a video of kids trying helicopter shot. "Chennai's Super Kids launch their own helicopters!" wrote CSK on Twitter as they shared the video. MS Dhoni Birthday Special: 5 Instances That Prove CSK Captain is The Man With a Golden Heart (Watch Videos).

Dhoni was last seen in action in June last year during the 2019 Cricket World Cup. The cricketer opted for sabbatical and was set for a comeback in the Indian Premier League 2020. Amid the coronavirus outbreak, IPL 2020 has been postponed indefinitely, and fans will have to wait for some more time before they get to see Dhoni playing helicopter shots again.

(The above story first appeared on LatestLY on Jul 07, 2020 12:03 PM IST. For more news and updates on politics, world, sports, entertainment and lifestyle, log on to our website latestly.com).