Left-arm pacer Mustafizur Rahman was on Sunday picked in the Bangladesh Test squad for the upcoming tour of West Indies. The series comprises two Tests along with three ODIs and three T20Is. 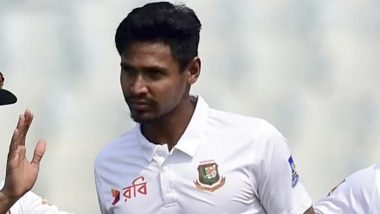 Dhaka, May 22 : Left-arm pacer Mustafizur Rahman was on Sunday picked in the Bangladesh Test squad for the upcoming tour of West Indies. The series comprises two Tests along with three ODIs and three T20Is. There were a lot of speculations about Mustafizur's immediate Test future but his inclusion in the squad ended all the drama. The pacer, who last played red-ball cricket during the home series against West Indies in 2021, was reluctant to play Tests as he stressed on the need to pick and choose formats to prolong his international career. How To Watch BAN vs SL 2nd Test 2022 Live Streaming Online and Match Timings in India: Get Bangladesh vs Sri Lanka Cricket Match Free TV Channel and Live Telecast Details on Gazi TV.

Later, BCB chief Nazmul Hasan insisted that Mustafizur will have to play Test cricket if the team requires his presence. It has been learnt that the board sent him a letter recently asking him to clear his position regarding red-ball cricket and the paceman eventually agreed to play Tests. "He (Mustafizur) informed us that he is ready to play Test cricket. Naturally his inclusion will strengthen our Test squad considering he is an experienced campaigner," BCB chief selector Minhajul Abedin told Cricbuzz on Sunday.

Apart from Mustafizur, Mehidy also made a comeback in the Test squad while Mushfiqur Rahim will miss the series in order to make a Hajj pilgrimage. Meanwhile, Anamul Haque, having been in the wilderness since 2019, makes a comeback in the ODI and T20 squads owing to his tremendous form in the Dhaka Premier League where he amassed more than 1000 runs. Nurul Hasan was also awarded a place in limited-overs squads thanks to his prolific form in the DPL.

Mohammad Saifuddin also made a comeback in the white-ball format, having last played international cricket during the T20 World Cup in which he was ruled out midway due to a back injury. Mossadek Hossain, who recently got a chance in the Test team, was also included for the ODIs and T20Is against West Indies apart from retaining his place in the Test squad. Meanwhile, Abedin also hinted that Shakib Al Hasan might not be considered for the ODIs if he is given a leave of absence by the BCB. The ODIs against West Indies are not part of the ICC Super League. IPL 2022: Hardik Pandya’s Captaincy Is Simple; He Doesn’t Impose His Will on Anyone, Says Sai Kishore.

(The above story first appeared on LatestLY on May 23, 2022 12:27 PM IST. For more news and updates on politics, world, sports, entertainment and lifestyle, log on to our website latestly.com).