Pakistan begin their T20 World Cup 2021 campaign with a much-anticipated match against India and then play New Zealand and Afghanistan in their next two group stage games, respectively. Pakistan won the T20 World Cup in 2009. 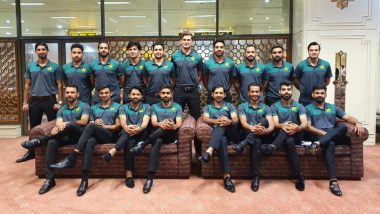 The Pakistan cricket team would aim at making an impact on the global tournament as they get ready to play in the T20 World Cup 2021 and there's no better way than to get things started off with a clash against arch-rivals India. The team, led by Babar Azam, has won any major ICC trophy after the 2017 Champions Trophy and they would be keen on recreating their title-winning performance from the 2009 T20 World Cup in the upcoming showpiece event. In this article, we shall take a look at the schedule for Pakistan cricket team in the T20 World Cup 2021. India vs Pakistan, ICC T20 World Cup 2021: Likely IND Playing XI vs PAK for Twenty20 WC Match

As mentioned before, they would kickstart their campaign with a blockbuster clash against India on October 24. Following that, Babar Azam's team would lock horns with New Zealand and Afghanistan. This  is the first time that Pakistan would be playing an ICC tournament under Babar Azam's leadership and it would be interesting to see more about his strategies and leadership skills. Fact Check: Did Pakistan Write UAE Instead of India on Their Official ICC T20 World Cup 2021 Jersey?

Also, they have a lot of relatively new and exciting players alongside experienced campaigners like Mohammad Hafeez and Shoaib Malik, which can turn out to be an interesting combination. But they would rely heavily on Babar Azam and Mohammad Rizwan with the bat and on Shaheen Shah Afridi in the bowling department.

(The above story first appeared on LatestLY on Oct 16, 2021 05:47 PM IST. For more news and updates on politics, world, sports, entertainment and lifestyle, log on to our website latestly.com).