Earlier, a Pakistan jersey was widely shared by social media users which featured a different looking jersey and with UAE 2021 written beneath the T20 World Cup 2021 logo instead of India 2021. This went viral on social media and many believed it to be true. 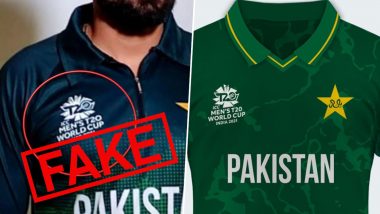 The fake Pakistan jersey (left) and the original one (right) (Photo credit: Twitter)

LEAKED: Pakistan's jersey for the #T20WorldCup!

It's a rule to put the name of WC hosting country on the jersey.

Every team put India's name as India is the official host for T20 WC 2021 except Pakistan, they put UAE instead.

However, after fact check it was revealed that it  was a fake jersey after the original one was unveiled by Pakistan Cricket Board. The new jersey has a different texture to the one that was 'leaked' and it has 'India 2021' written 'UAE 2021' since India are actually hosts of the tournament, despite it being played at another place.

This is the original jersey that was unveiled by Pakistan on Friday:

Although the fake jersey initiated a lot of talk and discussion on social media, now all rumours can be put to rest as now PCB has unveiled the official jersey.

(The above story first appeared on LatestLY on Oct 15, 2021 11:23 PM IST. For more news and updates on politics, world, sports, entertainment and lifestyle, log on to our website latestly.com).