In order to curb match fixing on the ongoing cricket match between Pakistan and England, ICC has banned Pakistan players from wearing Apple Smart Watches while playing. 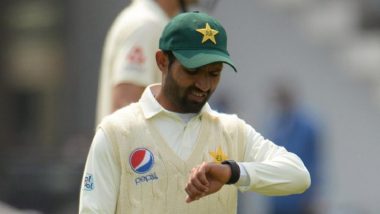 Pakistan Cricket Team is currently on England Tour wherein the former is playing the first Test match in Lords. Yet again, the Pakistani Cricket players have hit the grey area within the ICC's playing regulations. At the end of the first day of the very first test match between Pakistan and England, an anti-corruption official approached Pakistan players for barring them from wearing Apple smart watches on the field. See More: Sri Lanka Cricketer Silva Quits Tour After Father's Murder

Pakistan Bowler, Hasan Ali has confirmed that International Cricket Council representative had visited the Pakistan dressing room. He mentioned that, “An anti-corruption official from the ICC came to us and said they are not allowed. Next time, nobody will wear them.”

Moreover, Babar Azam and Asad Shafiq - two Pakistani players were seen wearing the smart watches during the first day of the test match. However, there were no suggestions of any wrong-doing here. As a precautionary step, ICC seems to have taken this step for curbing any chance of match fixing. Read Also: PAK vs ENG Live Streaming: Get Live Cricket Score, Watch Free Telecast of Pakistan vs England 1st Test 2018 on TV & Online

Also, the players as well as officials must handover their phones to anti-corruption officials prior the commencement of the match each day that will be locked away. The phones will be returned to the respective players at the end of the play.

In order to comply with ICC's anti-corruption regulations, the body has banned the Pakistan players from wearing the smart watches while playing. As per the regulations, the players must not be connected to any sort of phone or Wi-Fi compatible devices while on the field which can be used for sending messages.

As a reminder, previously 3 Pakistani players were involved in one of the biggest match fixing scandals in the cricketing history in the year 2010 on the same venue - Lords. They were implicated in deliberately bowling no-balls during the match.

(The above story first appeared on LatestLY on May 25, 2018 12:59 PM IST. For more news and updates on politics, world, sports, entertainment and lifestyle, log on to our website latestly.com).