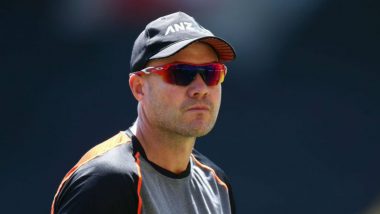 Auckland, July 2: Former New Zealand batsman Peter Fulton is all set to take up the role of Canterbury's head coach and thus will step down from the position of Black Caps batting coach.

Since retiring in 2017, Fulton has built up his coaching resume most recently working alongside Gary Stead as the New Zealand batting coach. Prior to that he was part of the coaching staff for New Zealand Cricket's winter training squad, batting coach for New Zealand Under 19s, coach of Christ's College First XI cricket team and even did a season with the Canterbury Kings as an assistant coach in 2018/19.

The former New Zealand international said he was excited about the challenge of bringing Canterbury back to their winning ways. India vs New Zealand 2020 Schedule, Free PDF Download: Get Fixtures, Time Table With Match Timings in IST and Venue Details of IND vs NZ T20I, ODI and Test Series.

"I loved my time with the Black Caps, but I've always wanted to be a head coach with the added roles and responsibilities that come with the job.

"To get the chance to do it for a province I'm passionate about and to be home with my young family made it the perfect job".

Fulton also emphasised his desire to develop international cricketers within the Canterbury squad.

"There's guys there that have the potential to play international cricket and my job is to get them there," Fulton said.

"If those guys can make the step up to international cricket, then I'm sure Canterbury will have some success along the way," he added.

Fulton officially begins the role with Canterbury on August 1.

(The above story first appeared on LatestLY on Jul 02, 2020 11:24 AM IST. For more news and updates on politics, world, sports, entertainment and lifestyle, log on to our website latestly.com).