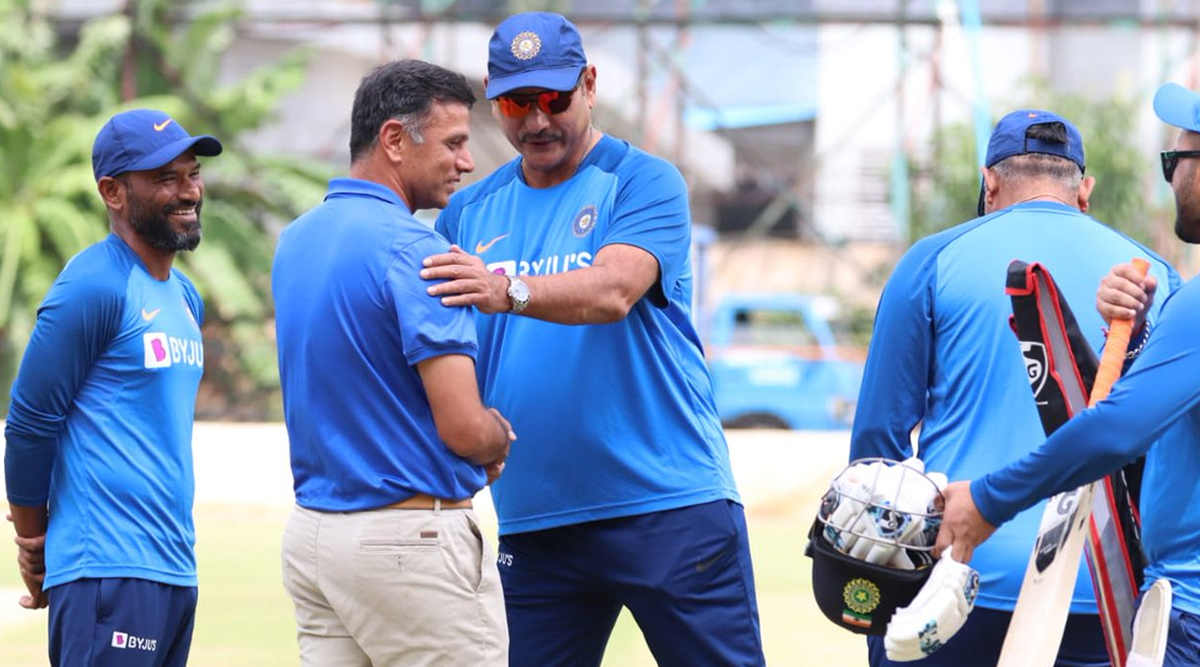 Bengaluru, September 20: National Cricket Academy (NCA) head Rahul Dravid was in attendance on Friday as the Indian players had an optional training session at the M. Chinnaswamy Stadium. The Indian team after winning the second T20I against South Africa in Mohali reached the Garden City on Thursday and some of the players hit the ground to fine-tune their skills under the watchful eyes of head coach Ravi Shastri. Shikhar Dhawan Posts Hilarious Video From Flight Ahead of IND vs SA 3rd T20I Match, Calls Rohit Sharma & Ravindra Jadeja 'The Loving And Caring Fathers' (Watch Video).

Taking to Twitter, BCCI posted a photo of the two stalwarts meeting at the stadium and wrote: "When two greats of Indian Cricket meet." With the first game in Dharamsala washed out, the Indians came out all guns blazing in the second game and with skipper Virat Kohli leading from the front, the Men in Blue thrashed the Proteas by 7 wickets. BCCI Shares Ravi Shastri and Rahul Dravid’s Photo, Twitterati Mercilessly Troll Them for Calling Team India Head Coach ‘Great’.

Speaking after the game, Kohli praised the youngsters for the comprehensive win and said: "When you play like that and win a game for your team, it is always a good feeling. The pitch was very good and an outstanding effort from the bowlers to pull things back. As long as they (youngsters) show character in difficult situations, they are going to present a strong case for themselves in the future."

With the bat, Kohli surpassed Rohit Sharma as the highest run-getter in T20 internationals as he remained unbeaten on 72 to guide the team home. The captain said the knock reminded him of his 82 not out at this very ground against Australia in the 2016 World T20.

"That night (2016 game vs AUS) was a revelation of how fit you can be on a cricket field. Lot of positive signs for us and they'll get many more games to prove their mettle. They are going in the right direction. The badge in front of my shirt -- India -- it is a pride to play for my country. Whatever it takes, whichever format, to get us across the line, I'll do that.

"Adapting in different formats is nothing but a mindset of making your team win. If you want to win a game for your team, you will find a way. That's the most important thing. I never think for myself, it's always about what the team needs. Test cricket, one-day cricket ... the will should be to win the game for your country."