There are no reserve days in the tournament which means that each time a match gets abandoned, the two teams have to share points. 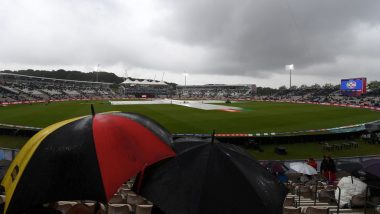 Bristol, June 12: Bangladesh were left disappointed after their 2019 World Cup match against Sri Lanka was washed out in Bristol. This was the third time match of the tournament to be abandoned due to rain and the second consecutive time such an incident had happened. Bangladesh coach Steve Rhodes was left visibly disappointed after the washout in Bristol on Wednesday.

"Yeah, it was very frustrating. We really targeted this sort of game as two points, and I know that Sri Lanka would have fought very hard and are no pushovers at all. But we do see it as one point lost, and that's disappointing," said Rhodes at the post-match press conference. There are no reserve days in the tournament which means that each time a match gets abandoned, the two teams have to share points. Rain Woes in ICC Cricket World Cup 2019: Reserve Days for Every Match Not Possible, Says ICC.

"I think when you look, if you know the English weather, sadly, we're going to get a lot of rain. We never know when the rain's going to come. People from all over the world keep asking me whether it's going to rain; I don't know."

"But at the moment, we're seeing some problems. And I know logistically, it would have been a big headache for the tournament organisers, and I know that it would have been difficult, but we have got quite a lot of time in between games, and if we have got to travel a day later, then so be it. We put men on the moon (laughing) so why can't we have a reserve day, when actually this tournament is a long tournament?" said Rhodes.

(The above story first appeared on LatestLY on Jun 12, 2019 12:45 PM IST. For more news and updates on politics, world, sports, entertainment and lifestyle, log on to our website latestly.com).