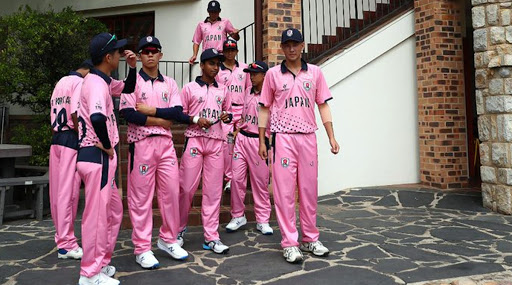 ICC recently posted a photo of the Japan U19 cricket team ahead of their maiden stint in the ICC Under-19 Cricket World Cup 2020. The Japanese players could be seen sporting a shiny pink kit which they will wear over the course of the tournament. ‘How good is Japan’s U19CWC kit’ International Cricket Council captioned their post and Rajashtan Royals seemed to be the most impressed with Japan’s outfit. The Indian Premier League side showed their appreciation for the kit by saying that it looks ‘Royal’. ICC U19 Cricket World Cup 2020 Schedule in IST, Free PDF Download: Full Time Table, Fixtures of Under-19 CWC 2020 In South Africa With Match Timings and Venue Details.

Rajasthan Royals quoted an ICC tweet of the first look of Japan’s Under-19 cricket team’s kit as they captioned their post 'Some would say it looks....Royal'. The former IPL winners were certainly fascinated by Japan’s pink kit as it resembles the outfit they donned for the first time in the 2019 Indian Premier League season. RR wore a pink kit once in the 2018 season to spread awareness about cancer but the following campaign embraced the new colour as the fans said they loved the Royals in pink. This jersey is clearly an ode to the capital of Rajasthan, Jaipur which is also known as the ‘Pink City’. Rajasthan Royals will be playing in the 13th edition of IPL which is scheduled to kick-start on March 29, 2020, and will be full of confidence as they have added some great players in their team during the 2020 IPL Player Auction. ICC U19 Cricket World Cup 2020 All Squads: Full Players List of Teams Participating in Under-19 CWC 20.

Speaking of the Japan cricket team, they will begin their first spell in the ICC U19 Cricket World Cup against New Zealand on January 18, 2020 (Saturday). Ahead of this, they will play a warm-up game against UAE on January 15, 2020. Japan have a tough task ahead of them as they are in a group which contains some heavyweight teams such as India, New Zealand and Sri Lanka.