Rajat Patidar Quick Facts: Things To Know About the Madhya Pradesh Cricketer As He Makes His IPL Debut for Royal Challengers Bangalore 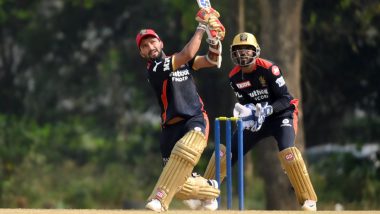 Rajat Patidar, Madhya Pradesh cricketer, is making his IPL debut for Royal Challengers Bangalore in IPL 2021. Patidar, 27, was included in the RCB playing XI for the Mumbai Indians vs Royal Challengers Bangalore (MI vs RCB) match. Patidar was bought by RCB at the IPL 2021 players auction for his base price of Rs 20 lakhs and makes his debut for the Virat Kohli-captained side against Mumbai Indians. This is the first time Patidar is part of an IPL franchise. As he aims to make his mark for RCB in Indian Premier League season 14, take a look at some quick facts about Rajat Patidar. MI vs RCB Live Score Updates of VIVO IPL 2021.

Patidar opens the batting for Madhya Pradesh in domestic cricket and is also likely to open the batting for RCB in the opening game against Mumbai Indians. Patidar made his first-class and List A debut for his state team in 2015 and made his T20 debut for Madhya Pradesh in 2018. Take a look at some facts about him. Marco Jansen Quick Facts: Meet the 20-Year-Old South African Pacer as He Makes IPL Debut for Mumbai Indians.

RCB captain Virat Kohli won the toss and opted to bowl first. Apart from Patidar, New Zealand all-rounder Kyle Jamieson is also making his IPL debut while Glenn Maxwell is making his debut for RCB. The franchise are still searching for their maiden IPL title and have lost three IPL finals. They will want to go the distance this year and lift the coveted trophy.

(The above story first appeared on LatestLY on Apr 09, 2021 08:42 PM IST. For more news and updates on politics, world, sports, entertainment and lifestyle, log on to our website latestly.com).