Pakistan Cricket Board (PCB) Chairman Ramiz Raja on Friday sought to build a relationship with Prime Minister Shehbaz Sharif, saying he is not in contact with Imran Khan since his ouster from the PM office. 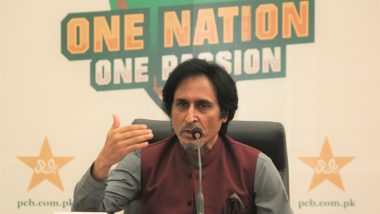 Lahore, June 24: Pakistan Cricket Board (PCB) Chairman Ramiz Raja on Friday sought to build a relationship with Prime Minister Shehbaz Sharif, saying he is not in contact with Imran Khan since his ouster from the PM office. In a press conference today, after the 69th meeting of the PCB Board of Governors, Ramiz Raja disclosed that the ex-premier has cut off ties with him after he was removed from the office. "Imran bhai cut off contact with me. I haven't talked to him for a long time now," Raja said, in response to a question. This Day That Year: Kapil Dev-Led Indian Team Won Maiden World Cup Title With Victory Over Mighty West Indies in 1983.

Ramiz Raja, a friend of the former PM, under whose captaincy he played during the 1992 World Cup, was brought in as PCB chairman after Ehsan Mani's tenure ended last year. After Imran Khan's ouster in April, there are reports that the new government is mulling to bring new leadership to the PCB. A couple of days ago, former chairman Khalid Mehmood also had a meeting with PM Shehbaz Sharif. However, Raja, in an attempt to continue in office, showed respect to the current PCB's patron-in-chief and emphasised building relations with him. India Played Its First-Ever Test Match On This Day in 1932.

"We can't live around speculation. I believe there is a need for continuity apart from political differences," Raja was quoted as saying by The News. "See, our prime minister is our patron-in-chief, we have requested his time and if he meets us, we will tell him about our work. I think there is no need for ego here as, in the end, we all want the upliftment of cricket," the ex-cricketer said. "If there is anything in the constitution about the removal of the PCB chairman every time, go ahead with it. Otherwise, fulfilling individual desires won't work in favour of the game," he said. "The ball is in his court," Raja said, referring to PM Shehbaz Sharif.

(The above story first appeared on LatestLY on Jun 25, 2022 11:26 AM IST. For more news and updates on politics, world, sports, entertainment and lifestyle, log on to our website latestly.com).