Ramadan Cup organiser Hedayatullah Zahir and Dr Nikmal, deputy mayor of Mehtarlam City of Laghman province, were among those killed. 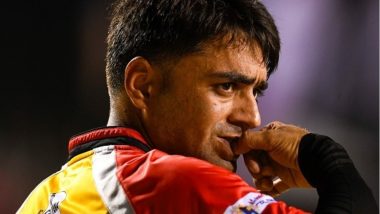 Multiple explosions during a cricket match in eastern Nangarhar province in Afghanistan has left eight dead and over 40 people injured. The series of blasts took place during a cricket tournament, Ramadan Cup, in which players and hundreds of spectaculars had gathered. Due to the holy month of Ramadan, the tournament is played during the night. No one has claimed responsibility for the attack but both Taliban insurgents and the Islamic State group are active in eastern Afghanistan, especially in Nangarhar province, reports PTI.

Three improvised explosive devices (IEDs) were detonated among the spectators during the tournament. Ramadan Cup organiser Hedayatullah Zahir and Dr Nikmal, deputy mayor of Mehtarlam City of Laghman province, were among those killed. No group claimed responsibility for the attack yet. Taliban spokesperson Zabihullah Mujahid denied any involvement, reports IANS.

Meanwhile, Afghanistan spinner Rashid Khan, who is currently participating in the Indian Premier League 2018 (IPL 2018), has mourned the death of Hedayatullah Zahir. Rashid, who hails from Nangarhar, took to Twitter and along with a photo of Hedayatullah Zahir wrote: “You will be missed bro #RIP you did lots of hard work always tried to make Nengrahar shining City (sic).”

At the time of the blasts, Afghanistan’s opening batsman Karim Sadiq reportedly was at the venue as well. Sadiq’s photograph of him carrying a child on his back after the blast Khas went viral on social media.

The #Afghan national cricket team player @karimkhansadiq rushing to take his wounded friends to hospital after last night #CricketStadiumAttack in #Jalalabad, he was there during the attack. @ACBofficials pic.twitter.com/hQYXLy6pBG

Shafiq Stanikzai, the Afghanistan Cricket Board chief executive, condemned the attacks and on Twitter wrote: “I strongly condemn the attacks last night during a local cricket tournament in Jalalabad, Nangarhar. "Cricket has been a source of happiness and pride for all Afghans, it has played a key role in bringing peace and uniting people. These attacks are against peace, unity and humanity."

ICC chief executive David Richardson also condemned the attack and wrote: "We are saddened to hear of the terrorist attack on a cricket match in Afghanistan and extend our thoughts and sympathy to the families of those killed and the wider cricket family there.”

(The above story first appeared on LatestLY on May 20, 2018 01:47 PM IST. For more news and updates on politics, world, sports, entertainment and lifestyle, log on to our website latestly.com).