Rohit Sharma's adorable daughter Samaira along with his wife Ritika Sajdeh did not miss the attention of the cameraperson during Day 3 of India vs South Africa 4th Test, 2019. Baby Samaira can be seen searching for her father Rohit Sharma when he got off the field during the tea break. 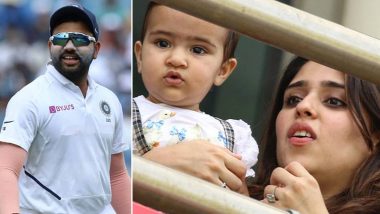 Rohit Sharma's adorable daughter Samaira along with his wife Ritika Sajdeh did not miss the attention of the cameraperson during Day 3 of India vs South Africa 4th Test, 2019. Baby Samaira steals the show as the cute toddler cheers for dad during India vs South Africa Test match. The home team is currently on the driver's seat in the ongoing Test with South Africa being bowled at 275 runs in reply to India's score of 601/5. Rohit Sharma made a heroic comeback in the previous Test Match played at Visakhapatnam where he scored centuries in both innings. However, in the 2nd Test which has started from Oct 10, 2019, at Pune he managed to score only 14 runs in the 1st inning. Rohit Sharma Dismissed Cheaply For 14 Runs During India vs South Africa 2nd Test Match 2019, Gets Trolled on Twitter!

Indian Cricket Team official Instagram page has shared a picture of Samaira Sharma with Ritika Sajdeh with Rohit Sharma in the form of collage. They have captioned the picture as, 'Don't worry Papa Will Be Back, He's gone for tea'. Meanwhile, at stumps on Day 3, South Africa got restricted at the score of 275 runs. We saw fine bowling spells from Ravichandran Ashwin and Umesh Yadav. The former bagged four wickets, while latter scalped three.

India got a stronghold of this match when they declared their inning on 601/5, thanks to the contribution from skipper Virat Kohli who made unbeaten 254 runs. Once again Mayank Agarwal came out strong as he scored 108 runs. After restricting South Africa at 275 runs, India will now have to take a decision to enforce follow on or not. As of now, India is all set for a comfortable victory for yet another series win.

(The above story first appeared on LatestLY on Oct 12, 2019 07:35 PM IST. For more news and updates on politics, world, sports, entertainment and lifestyle, log on to our website latestly.com).