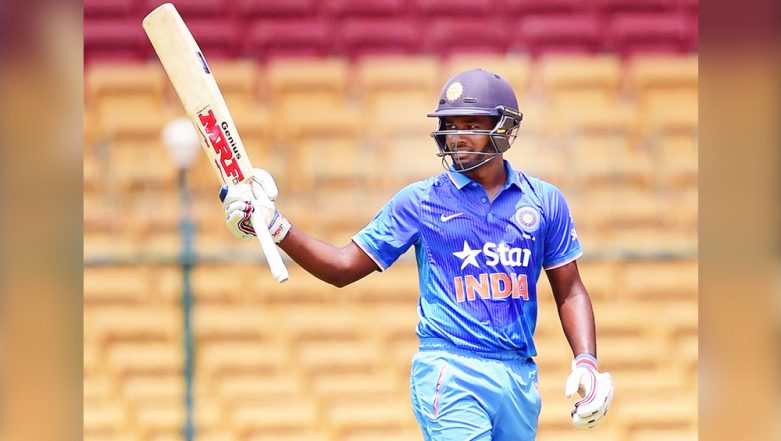 Thiruvananthapuram, September 7: Sanju Samson said that he has decided to give his match fees from the India 'A' matches he played to the groundsmen of the Greenfield International Stadium in Thiruvananthapuram. India 'A' hosted South Africa 'A' in a five-match one day series. Intermittent rains in Kerala's capital city had caused reduction of overs in all the matches with the fourth match having to be played over two days.

Samson, who caught the eye with a blistering 48-ball 91 in the final match, said after the game that he had decided to donate match fees from the two games that he played to the groundsmen for their efforts to ensure that the series could be played despite the treacherous weather. Sanju Samson to Marry College Classmate, Charu, in December This Year; Cricketer Announces on Facebook.

"We have to give credit to the groundsmen. Because of them, we were able to play. If there was some wetness here or there, then the match officials would not have allowed matches to happen. We really have to thank them. So I have decided to give my match fees to the groundsmen," said the 25-year-old Kerala wicketkeeper. Shikhar Dhawan also acknowledged the efforts of the groundsmen and spent time with them to click pictures. India 'A' won the series 4-1.