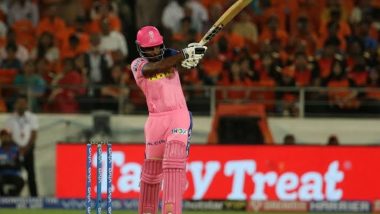 Sanju Samson is one of the biggest hitters of the ball and he has been blazing guns in the on-going game against the Chennai Super Kings at the Sharjah Cricket Stadium, UAE. Sanju has been slamming sixes one after the other. It wouldn’t be wrong to say that it is raining sixes and fours at the Sharjah Cricket Stadium, courtesy Sanju Samson and Rajasthan Royals’ captain Steve Smith. Needless to say that the netizens have gone berserk looking at the tall sixes by both of them. Sanju Samson made way to the pavilion on the score of 74 runs from 32 deliveries. Whereas Steve Smith scored a half-century. The social media went berserk with an ocean of tweets hailing the two.

Sanju Samson stepped on to the pitch after the wicket of the opener Yashavi Jaiswal who walked away to the pavilion on the score of six runs. In the 14th over, the Rajasthan Royals scoreboard read 149 runs for the loss of three wickets. A few netizens even took a jibe at Rishabh Pant who has been preferred as the first choice of a wicket-keeper in the Indian team. No sooner, Sanju Samson slammed the half-century, netizens trended #Samson on social media. Even Rajasthan Royals hailed the wicket-keeper.

Why should you chose Samson

Dear @BCCI , I hope , at least now u knw why should u choose Samson over Pant and not vice versa! #justsaying#CSKvsRR

(The above story first appeared on LatestLY on Sep 22, 2020 09:00 PM IST. For more news and updates on politics, world, sports, entertainment and lifestyle, log on to our website latestly.com).