Former Australia captain Steve Smith has been cleared a fitness test and confirmed for the first Test against Sri Lanka starting here on Wednesday (June 29). 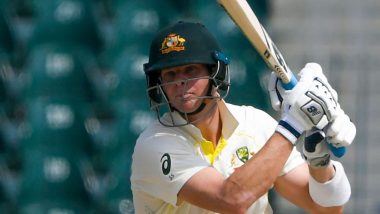 Galle (Sri Lanka), June 26 : Former Australia captain Steve Smith has been cleared a fitness test and confirmed for the first Test against Sri Lanka starting here on Wednesday (June 29). Smith has been troubled by his injured quad and he too missed the first three ODI matches on the tour. He is one of those on a long list of Australian players that are struggling with injuries. SL vs AUS, Test Series 2022: Usman Khawaja Says Australia Much Better Prepared for Subcontinent Pitches Now.

Mitchell Starc still needs to get through a crucial nets session to confirm his availability while Travis Head is also battling a hamstring strain. Australia has called in seasoned Glenn Maxwell as an additional option ahead of the opening Test match. On Sunday, the touring party got some good news as Smith, who scored a Test century when Australia last toured the islands in 2016, cleared for the first Test. "If we were still playing one-day cricket I would be touch and go, but Test cricket I will be fine," Smith was quoted as saying by the Australian Associated Press (AAP). SL vs AUS, Test Series 2022: Glenn Maxwell Banking on Ability To Tackle Good Spin Bowling in Tough Conditions After Test Recall.

"Test cricket is a bit easier (on the quad). I field in the slips, won't be doing a great deal of running around in the field. And then in these conditions, there's not a lot of hard running. "They usually have a few sweepers and it's four or one quite often. So there's not a heap of hard running," he said.

(The above story first appeared on LatestLY on Jun 26, 2022 06:58 PM IST. For more news and updates on politics, world, sports, entertainment and lifestyle, log on to our website latestly.com).