Harmanpreet Kaur and her team have already won the series and will now aim for a clean sweep. Sri Lanka on the other hand, will play for pride and a consolation win. 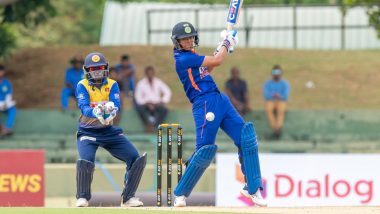 Having clinched up the series win already, India are now set to take on Sri Lanka in the final match of the three-game affair on Monday, June 27. The match would be played at Rangiri Dambulla International Stadium and is scheduled to begin at 2:00 pm IST (Indian Standard Time). Bowling first, the Indian women's team did well to fight back after Sri Lanka had gotten off to a great start to the game with an opening stand of 87 runs. Barring skipper Chamari Athapaththu (43) and Vishmi Gunaratne (45) none of the Sri Lanka batters could get going and even have a double-digit score as they were restricted to 125/7 in their 20 overs. Deepti Sharma was India's best bowler with two wickets while Renuka Singh, Pooja Vastrakar, Radha Yadav and Harmanpreet Kaur took one apiece. Smriti Mandhana Completes 2000 T20I Runs During SL W vs IND W Clash in Dambulla

In response, India did off to a sedate start, losing two wickets in the first six overs but Smriti Mandhana (39) and skipper Kaur's (33) efforts were enough for them to seal a win and the have the series in their favour.

The hosts would now aim to play for pride and have a consolation win under their belt. India on the other hand, will eye a series sweep. Despite leading 2-0, there are concerns about the Indian batting line-up as the skipper would expect her batters to produce a strong effort.

The two teams have met a total of 20 times until now. The visitors dominate this head-to-head record with 19 wins while Sri Lanka have clinched only three victories. One game has ended in no result.

For India, skipper Harmanpreet Kaur and also Deepti Sharma would be the key players while Sri Lanka would rely on their captain Chamari Athapaththu and Kavisha Dilhari.

The battle between Harmanpreet Kaur and Inoka Ranaweera would be an interesting one. So would the duel between Deepti Sharma and Chamari Athapaththu. Both these battles can have an impact on the outcome of this match.

Unfortunately, there are no official broadcasters yet for the India Women's tour of Sri Lanka. But the good news for Indian fans is that FanCode would provide live streaming of the series on their app for free.

(The above story first appeared on LatestLY on Jun 26, 2022 01:31 PM IST. For more news and updates on politics, world, sports, entertainment and lifestyle, log on to our website latestly.com).